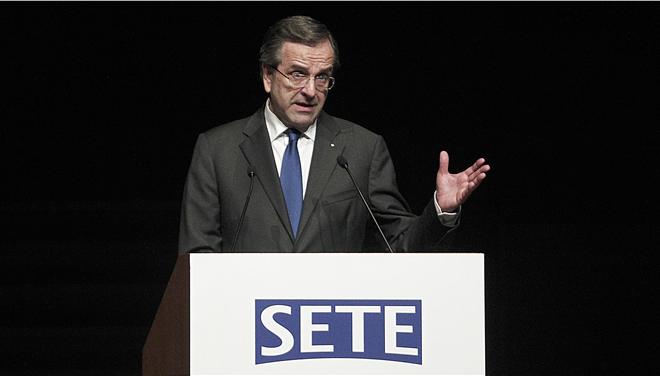 “We do not need another memorandum, as Greece is not just exiting it, but the country will also be absolutely safe in the post-memorandum era.” With these words, Prime Minister Antonis Samaras described what he sees as the near future of Greece during the 13th Tourism and Development Conference of the Association of Greek Tourism Enterprises (SETE). In an attempt to send a message to the opposition, the Greek PM went on to say that his administration will not allow anyone to block the reforms and negate all these that have been achieved.
While condemning political instability and polarization, Samaras underlined the government’s achievements over the past two and a half years and said many more are to come, as long as Greece will stay firmly on the reform track, which benefits the country and its people, and does not make a u-turn to political uncertainty.
“Tourism can be the locomotive for us to exit the crisis and enter development, but it can also be the catalyst for the development of many other industries,” he said, revealing that the Greek tourism industry will receive a 500-million-euro cash injection per year for investments from Brussels. Continuing, the PM underlined that Greece can evolve into a unique island tourism destination by developing specified sub-sectors, such as medical and religious tourism.
“With a 20% contribution in GDP and breaking one record after another, Greek tourism has been upgraded in quality compared to the past in relation to the competition,” he added, mentioning that political stability is a prerequisite for the success of such an industry, aiming to attract as many visitors as possible in the years to come. “There are some who react and we found them against us when we abolished cabotage on cruise tourism and even heard them suggest to eliminate SETE as a government’s social partner,” he concluded.