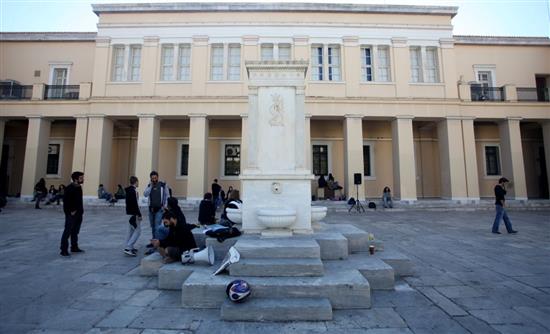 University of Athens Rector Theodoros Fortsakis filed a lawsuit against those responsible for the disruption of the university’s operation. According to Greek news, he did not request immediate police intervention and stated that no damage had been caused to university property.
Following the accusations, chief prosecutor of the First Instance Court Ilias Zagoraios ordered an urgent preliminary investigation to ascertain the truth behind the Rector’s statement.
Meanwhile, the issue of guarding universities has caused problems between the academic community and main Greek opposition party SYRIZA. The controversy began last week, after Fortsakis’ decision to not grant access to the university premises to students who were aiming at an occupation, in response to the rector’s decision to determine standards and control procedures for those entering university areas.
On Monday, the University of Athens released a statement denouncing three SYRIZA MPs, Apostolos Alexopoulos, Christos Mantas and Theano Fotiou, who attempted to enter the building without any authorization, while also facilitating the uncontrolled entry of students and others who had no reason to be there.
In a letter to the Greek Parliament, Education Minister Andreas Loverdos claimed that the Constitution gives Greek universities the right to self-ruling, while he also noted that the academic asylum law has been abolished. Therefore, these institutions have the right to decide how to control and protect university areas, as well as the students and staff therein.
Loverdos’ letter was sent to the Greek Parliament on October 16, after a question was put to the table by New Democracy MP Panayiota Iakovidou regarding guarding university areas.

Disney+ is currently developing a film based on the life of star Milwaukee Bucks basketball player Giannis Antetokounmpo.
Greek News