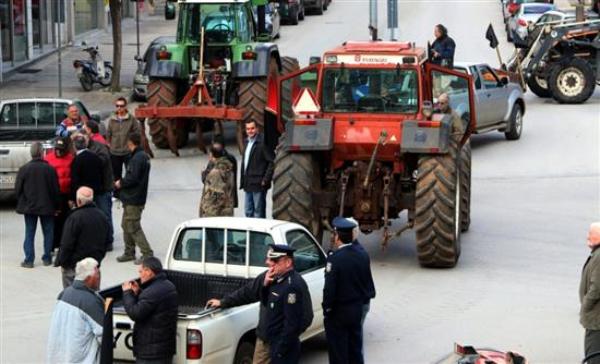 Greek farmers have decided to launch mobilizations on November 1, with their participation in a protest rally called by the PAME labor union in downtown Athens’ Syntagma Square, it was announced in a press conference held on Tuesday. They also warned that their protests may escalate, depending on the results, in the second half of January.
The relevant decisions were made by farmers’ representatives from across the country, who attended a meeting in Larissa, central Greece, on Sunday.
At the press conference, farmers said their sector faces acute problems, expected to intensify with the implementation of the new Common Agricultural Policy, which will result in a reduction of subsidies they receive today of up to 40%, while placing new restrictions on cultivations.
They underlined that the heavy taxation on farmers as of this year, the extraordinary surtaxes, the Unified Property Tax (ENFIA), the production cost increase and the very low prices of basic products, drastically reduced farmers’ income and led thousands of them to poverty.
The farmers announced their decision to participate in the PAME protest rally in Athens, followed by protests outside branches of Hellenic Agricultural Insurance Organization (ELGA), Agricultural Social Security Organization (OGA) and banks nationwide, including tax bureaus. In mid-January, they will assess their actions and decide on the future course of their mobilizations.
(source: ana-mpa)