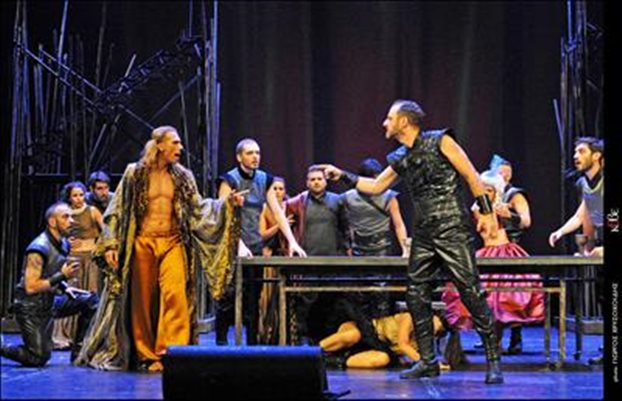 Four scheduled performances of the rock opera “Alexander the Great,” playing in Thessaloniki, northern Greece between October 23-26, have already sold out.
The opening of the highly-anticipated show will be held October 23 in Thessaloniki’s Royal Theatre. The tickets, ranging from 20 to 100 euros, were sold out just hours following the show’s announcement.
The show, with a duration of approximately 135 minutes, will be presented with English subtitles. The audience will have the opportunity to admire a ten-member orchestra and a group of thirty actors, dancers and singers.
The story begins a year after Alexander’s birth on the Greek island of Samothrace – where, in the midst of the Bacchic Mysteries, Olympia met King Philip of Macedonia. It concludes with the death of Alexander the Great in Babylon, 33 years later.
The show grapples with the life of a man who changed the course of world history. Its aim is to give audience members a taste of the human nature of Alexander.
“I believe that the Greeks of the diaspora and the international audience will embrace the show,” said Meni Lysaridou, President of the National Theatre of Northern Greece, in a press conference held on October 16 in Thessaloniki.
Before touring Greece and the world, the show will premier in Thessaloniki for unemployed and disabled persons in two special, free events held on October 29 and 30.
The Athenian audience will also have the opportunity to enjoy “Alexander the Great” on February 27, 28 and March 1, 2015.