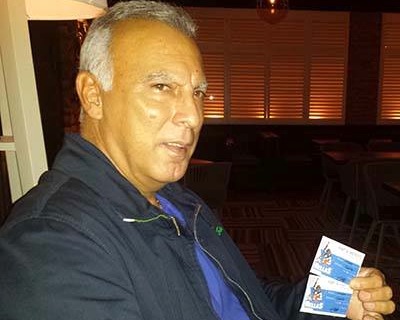 Nikos Galis, one of the greatest Greek basketball players of all time, was announced an honorary member of the Greek team of Göteborg BC in Sweden.

“As of today, I am a member of the Greek team of Sweden. I was honored to accept the invitation of Hellas Göteborg BC. It is a great honor that Greeks who live so far away from our country, never forgot my contribution to basketball and Greek sports. This recognition and love from fans, is an athlete’s greatest prize”, Galis stated on his Facebook page.

Galis was a point guard during his college years but turned into a shooting guard as a pro. He spent most of his career in Aris team of Thessaloniki before having a late stint with Panathinaikos in Athens. He is the Euroleague’s all-time leader in both career points scored and points per game (counting both FIBA Europe and Euroleague Basketball era games), leading the scoring competition eight times. In the premier European club competition, he reached the Euroleague Final Four on four occasions, three consecutive ones with Aris (1988–90) and another one with Panathinaikos (1994). Galis is also the Greek Championship’s all-time leading scorer in both career points scored and points per game (counting all the formats in the league’s history). Moreover, he holds the FIBA World Championship scoring records for the highest career points per game average, as well as most points ever scored at a World Championship tournament, which he set at the 1986 FIBA World Championship.

Galis led the Greek national team to a EuroBasket gold medal in 1987, as well as to a EuroBasket silver medal in 1989, earning the tournament MVP honor in 1987 and being elected to the All-EuroBasket Team both times. Following the stunning success of the EuroBasket title in 1987, he won the Mr. Europa Player of the Year and the Euroscar awards the same year. Galis is widely regarded as one of Europe’s all-time greatest players in professional club basketball history, as well as one of the all-time greatest players in FIBA international basketball history. He is highly adored in Greece, where he is considered by many to be the greatest individual athlete that the country has ever had. His years at Aris lifted Greek basketball from relative obscurity into common public entertainment, with Galis being the figure that eventually inspired thousands of Greeks to take up the sport of basketball.

Cryptocurrencies Tumble as Trump Says Bitcoin is a “Scam”