Greek PM: No Need for New Memorandum, Elections in June 2016 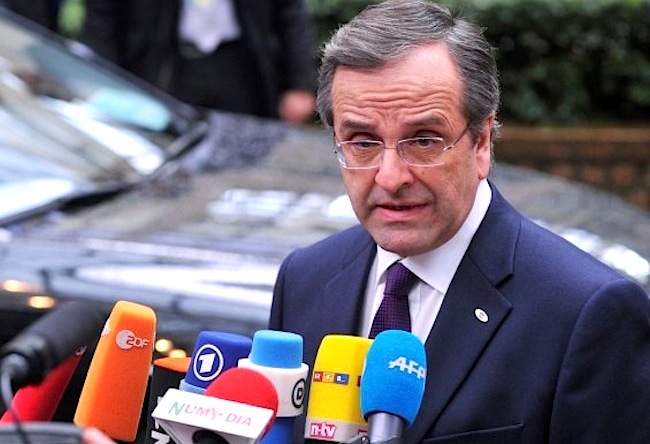 Greek Prime Minister Antonis Samaras appeared optimistic earlier today that the country is not going to need a new memorandum and it will soon be on track of development. During a press conference on the sidelines of the European Union-Asia Summit Meeting in Milan, Samaras also revealed that Greece is in talks with lenders over the country’s post-bailout period, including a potential credit line Athens could tap in case of market turmoil.
“It has been clear from Greece’s side that we do not need a new bailout program. In any case, we all agree that Greece will stick to the path of reforms. Therefore, there is agreement on the day after and there is a serious discussion with our partners and lenders on the first transitional phase,” he said on his statement, declaring that his intention is to leave the bailout program by the end of 2014, more than a year ahead than scheduled.
Regarding the three-day selloff in Greek stocks and bonds, Samaras said that in some cases, markets tend to exaggerate. In addition, he blamed main opposition party SYRIZA for lack of solemnity, adding that the only thing that worries the markets is political instability.
“Elections will be held in June 2016”
Samaras also said Greece would not hold snap elections next year, a possibility that has worried investors who fear political instability might undermine reform efforts.
“Elections will be held in June 2016, at the end of the four-year parliamentary term,” said Samaras. “Our new president will be elected early next year,” he added, referring to a parliamentary vote in early February to elect the President of the Hellenic Republic.
The outcome of the presidential vote could, in turn, prompt an early national election if Samaras does not get enough backing to push his candidate through. So far, Samaras’ majority in parliament is well below the number needed to win the vote, so he needs backing from opposition parties.