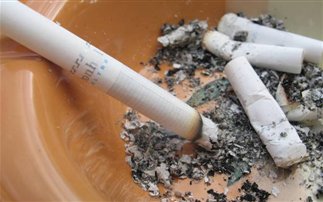 An online survey conducted by AKOS, a non-profit company, sheds intriguing light on Greek smokers, non-smokers and those who have kicked the habit. The survey has attempted to map smokers’ profiles, the conditions under which new smokers start smoking, the factors that would lead them to quit smoking and Greeks’ attitudes towards new anti-smoking regulations.
According to the results, recently presented by AKOS President Dr. Katsochis in an event held in Athens, many Greeks start smoking because they are influenced by their friends and consider the habit trendy.
Smoking is fashionable

Asked why they started smoking, 57% of Greek men and and 28.6% of Greek women claimed that they were influenced by their surroundings. 17% of men and 16.1% of women acknowledged that they first started to smoke because they thought the habit fashionable. “It seems that social conditions not only legitimize but also encourage more ever than before the destructive habit of smoking,” AKOS researchers found.
23.7% of women and just 7.5% of men said they started smoking due to “emotional reasons.”
The main reason both men and women gave for smoking was pleasure (36.5% of men; 34.3% of women). A large percentage of men (25%) and only a small percentage of women (12%) conceded any addiction to smoking. A sizable (16.6%) percentage of women claimed that smoking helps them in a psychological way, with just 6.5% of men admitting the same. A significant proportion of women (20.7%) and men (16%) associates smoking with certain habits.

Health
One in two surveyed women claimed to be determined to quit smoking; just one in four men shared the desire. 35.5% of men said they would stop smoking because of illness, 27% out of other medical concerns. 27.5% and 13.9% of women responded affirmatively to each respective question.
One in three smokers has never tried to quit

According to the survey, one third of all Greek smokers have never even considered quitting. Four in 10 have made ​​one to two attempts.
Dr. Katsochis emphasized that “we need more centers for tobacco cessation, accessible to all, and if possible, for free.”
Non-smokers in Greece are tolerant towards smokers
According to the research, non-smokers are generally tolerant towards smokers, suggesting that smoking is an acceptable habit in Greece. “Unfortunately the old standards have become stereotypes. This condition should be treated radically through awareness of the harmful effects of cigarettes not only to smokers but also for non-smokers,” reads the AKOS survey conclusion.
Non-smokers cited various reasons for not smoking: 40% of are concerned about their health; 35.2% cited the odor from smoking; 16% mentioned advice from teacher or parents. 10% never started smoking because they were actively involved in sports.
More than 50% of respondents said that the internet was their primary source for information on smoking. TV remains the key medium for 30% of responders. 70% of smokers claimed that the Ministry of Health’s prohibitions had no affect on their decision making.
1618 people participated in the AKOS survey, all aged between 25 and 65 years. Conducted online randomly, 40.11% of responders were smokers, 38.26% were non-smokers and 21.63% ex-smokers.