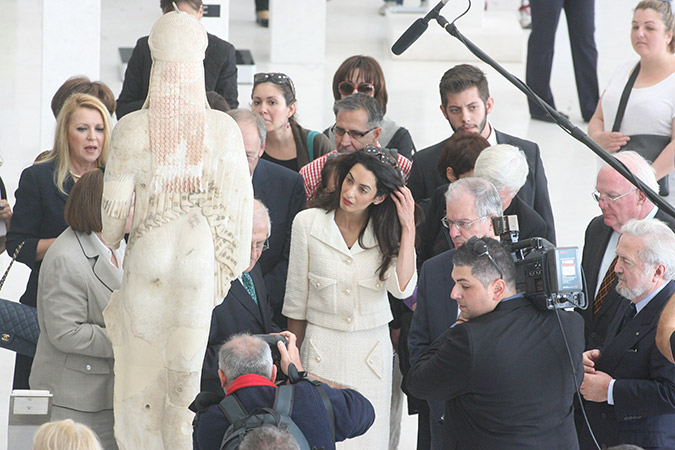 This afternoon, Amal Alamuddin-Clooney leaves Greece following a three-day visit to Athens in which she counseled the Greek government on the proper legal route for reclaiming the Parthenon Marbles from the British Museum.
The 36-year-old lawyer – along with cultural heritage lawyers Norman Palmer and Geoffrey Robertson, as well as David Hill, chairman of the International Association for the Reunification of the Parthenon Marbles – met with Prime Minister Antonis Samaras and Minister of Culture Kostas Tasoulas to discuss the repatriation of the Marbles, an issue of long-standing discord between the Greek and British governments. According to witnesses, discussions between the legal team and the Greek government ended on an optimistic note.
The team claims that Greece has strong legal grounds for demanding the return of the Marbles. However, Minister of Culture Kostas Tasoulas has indicated that litigation is currently off the table. “We decided not to go to the courts. We decided to ask UNESCO to mediate so that the Parthenon Marbles will be reunited, having on our side distinguished Greek and foreign counsels.”
“We decided to invite the United Kingdom to the mediated talks,” the minister added. “The waiting period for the UK to respond is six months, during which an intergovernmental UNESCO committee will be formed. During this period, this group of distinguished counsels along with the ministry’s legal department will provide all neccessary legal advice.”
Touring the Acropolis Museum, Alamaddin-Clooney was able to witness firsthand the Parthenon Marbles in their incomplete state. The Parthenon is the cradle of modern civilization, she noted, adding that Great Britain should recognise the fact that the Marbles must be reunited and that Greece has the right to claim them back.
Mr. Palmer said that, despite the British Museum’s refusal to return the sculptures, “we live in an ever-changing world and laws evolve. As international laws change, so do museums.”
Mr. Robertson clarified that Greece will not pursue a legal course of action. “There are alternative ways to resolve the issue, such as mediation, international treaties, international courts… Great Britain is great because it respects international law.”
Camps within the British press were highly critical of Alamuddin’s visit. In a report entitled “Amal Alamuddin is the Latest Exhibit in the Museum of Disempowered Women,” Time narrowed in on the “frenzy of flashbulbs and fashion commentary.”
A Daily Mail commentary recommended that Mrs. Clooney stick to posing for photographers. The article goes on to suggest that the Parthenon friezes were “rescued by Lord Elgin” and that “their return has been exploited by Greek politicians who see votes in making the issue a pressing matter of national pride.”