Is the Mother of Alexander the Great in the Tomb at Amphipolis? Part 4: An Explanation of the Mosaic 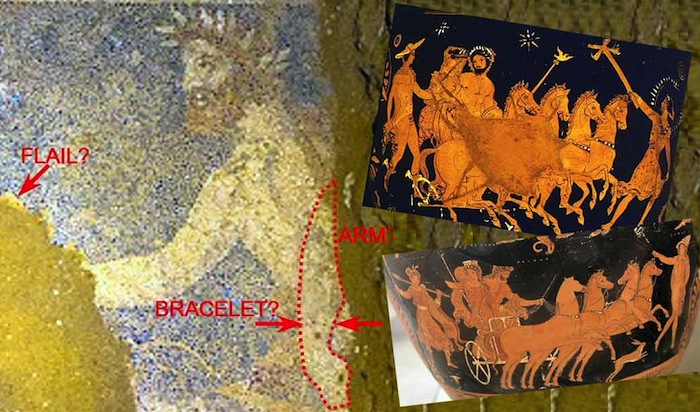 I wrote my initial article on this question on the morning of 6th September, a day before the announcement of the discovery of the caryatids, and I wrote a second part on 20th September and a third part on 28th September dealing with the Caryatids. The discovery of the mosaic announced yesterday has prompted this fourth article, but in order to set it in context I first offer the following summary of the inferences I drew from the evidence available in my first three articles:
1) Sphinxes decorated the thrones found in the tombs of two mid to late 4th century BC queens of Macedon, one of whom was Alexander’s grandmother Eurydice I
2) Greek mythology recognised Hera the wife of Zeus as the mistress of the sphinx: the 4th century BC Macedonian kings identified themselves with Zeus, so it would make sense for their principal queens to have identified themselves with Hera
3) The female sphinxes at Amphipolis have their closest parallel in a pair of female sphinxes found by Mariette at the Serapeum at Saqqara, which were dated to the reign of the first Ptolemy by Lauer & Picard, mainly on the basis of an associated inscription: the Serapeum at Saqqara is also a strong candidate for the site of the first tomb of Alexander the Great
4) There are strong parallels between the façades of the tombs of Philip II and Alexander IV at Aegae and the reconstructed façade of the lion monument that stood atop the mound at Amphipolis
5) The paving in the tomb at Amphipolis closely matches paving in the 4th century BC palace at Aegae
6) The 8-petal double rosettes in the Amphipolis tomb have an excellent match on the edge bands of the gold larnax of Philip II
7) The evidence therefore favours an important queen being entombed at Amphipolis: Olympias, Alexander’s mother, and Roxane, Alexander’s wife may both have died at Amphipolis and are the only prominent queens that accord with the archaeologists’ firm dating of the Amphipolis tomb to the last quarter of the 4th century BC
8) On the assumption that the occupant of the Amphipolis tomb is Olympias, a straightforward explanation of the caryatids would be that they are Klodones, the priestesses of Dionysus with whom Plutarch, Alexander 2 states that Olympias consorted: the baskets worn on their heads would be those in which Plutarch says the Klodones kept snakes.
9) Plutarch, Alexander 2 tells the story of Philip having dreamt that he sealed Olympias’s womb whilst she was pregnant with Alexander with the device of a lion. This provides an explanation for the tomb having been surmounted by a lion monument.
The newly discovered mosaic from the Lion Tomb at Amphipolis is a spectacular example of its kind (Figure 1). It exhibits considerable artistic prowess and its quality is further attested by the unusually wide range of colours deployed in its execution in comparison to other Macedonian mosaics of the 4th century BC.
It covers virtually the entire floor of the chamber of the tomb immediately behind the caryatid sculptures that I have suggested represent priestesses of Dionysus. But it has not yet been fully revealed. Particularly on its right-hand side, it is obvious that important elements of its design are still concealed beneath the sandy earth that was used to fill the tomb.
The mosaic depicts a chariot drawn by a pair of horses, which are being led by a youth wearing winged sandals and carrying a type of wand called a caduceus. The chariot is driven by a bearded man wearing a bright wreath or radiate crown. The Greek Ministry of Culture has correctly advised that the youth running ahead of the horses is Hermes, the messenger of the gods, here depicted in his traditional role as a psychopompos, one who leads the souls of the dead into the afterlife.
In Christian art there are certain traditional scenes such as Nativities, Crucifixions, Madonnas, Last Suppers and Baptisms of Christ, which are defined by a set of common elements, but which have been produced with variant details by a host of artists. The newly discovered mosaic comprises most of the required elements from just such a traditional scene found in artworks from ancient Greek religion: the abduction or rape of the goddess Persephone by Hades, the god of the Underworld. The only essential element of this traditional scene that is currently missing from the new mosaic is Persephone herself.
Perhaps the most famous ancient version of the Abduction of Persephone is the mural discovered in the first of the three main tombs under the Great Tumulus in the Royal Cemetery at Vergina (ancient Aegae) in Macedonia (Figure 2). In this version Hermes again leads the horses of the chariot carrying his caduceus and wearing the same petasos hat and cloak as the Hermes in the new mosaic. A bearded Hades drives the chariot and grasps a distressed Persephone. This tomb is next door to the tomb of the father of Alexander the Great. It had been looted when discovered in 1977 but it contained the scattered bones of a woman, a man and a newborn baby.
Other versions of the Abduction of Persephone are to be found on Greek vases from the same period (Figures 3 & 4). One shows Hades driving Persephone in a chariot with Hermes strolling beside it and Hecate lighting their way. This is actually dated to the late 4th century BC, but it may depict Persephone’s emergence from the Underworld rather than her abduction. It is interesting that Hades here wears a radiate crown or halo rather similar to that worn by the bearded chariot driver in the new mosaic. Another version (Figure 4) shows Persephone standing beside Hades in his chariot, gripping its front rail with a braceleted arm, again with Hermes as Psychopompos striding ahead of the horses.

It is interesting also to note that the rear panel of the throne found in the tomb of Eurydice I, Alexander the Great’s grandmother, at Vergina/Aegae also depicted Hades and Persephone in a four-horse chariot (Figure 5). This time they are shown as king and queen of the Underworld. This throne had sphinxes and Caryatids as well as this painting. It is turning out to be a microcosm of the Amphipolis tomb and serves further to emphasise the connections between the finds at Amphipolis and the late 4th century BC royal tombs at Aegae.
From all this it follows that we should be looking for the possible uncovering of a Persephone figure in the chariot next to the bearded man in the newly revealed mosaic. But she would be depicted in the unexcavated portion at the right-hand side, so it would seem we should have to wait for the archaeologists to complete the unearthing of this magnificent work of art. However, a hint of what is to come may already be visible. Careful examination of the area around the possible Hades figure


reveals some interesting points (Figure 6). Firstly, Hades may be driving the horses with a flail or similar, because the topmost part of some such object is visible just above where his hand would be at the top edge of the central patch of damage.
Possible yellow cords from this flail appear to the right of the damage patch just below the arm of Hades.
Secondly, and more importantly, there appears to be an arm descending down the right edge of the excavated area such that the hand is grasping the front rail of the chariot (outlined in red in Figure 6) rather like the arm of Persephone grasping the chariot rail on the vase mentioned above. It might be tempting to try to see this as the other arm of Hades, but that does not really work, because it would make Hades into a hunchback, which is very improbable in a work of this nature and quality.
Additionally, the arm grasping the chariot rail appears to wear a bracelet just above its wrist (dark dots between the pair of arrows in Figure 6), again this parallels the bracelet worn by Persephone on her arm that is clutching the chariot rail on the vase.
This bracelet can be seen more clearly in a close-up of Hades (Figure 7). In fact Hades appears to have a mantle covering one shoulder. It appears more likely to me that his body is facing away from us and that he is looking forward over his left shoulder, so that the mantle is draped over his right shoulder and the flail is in his left hand, but it is not impossible that his body is facing towards us and the mantle is over his left shoulder. Nevertheless, whichever way he is facing, that other arm does not seem to be his. Furthermore, although it is not impossible for a man to be depicted wearing a bracelet in Greek art, it is rather more likely for a woman. It seems therefore a reasonable conjecture that the arm of our missing Persephone may already have been revealed to us.
If indeed the chariot contains a female passenger yet to be fully uncovered, then the scene is definitely another Abduction of Persephone. But the real significance is that it would be hard not to see this also as a depiction of the occupant of the tomb being driven into the Underworld in the guise of Persephone. If so, the occupant was a woman and probably an important queen of Macedon given the fabulous scale and quality of this tomb. In the light of the firm dating to the last quarter of the 4th century BC only two candidates are known to us: Olympias, the mother of Alexander, and Roxane, his wife. The latter almost certainly died at Amphipolis and the former died when the focus of events was at Amphipolis. Of the two, Olympias is the more likely occupant, because she is known to have associated with priestesses of Dionysus and the lion could be symbolic of the lion device with which Alexander’s father dreamt he
had sealed her womb. Furthermore, Alexander had expressed a desire to make her a goddess before he died (Curtius 9.6.26) and he himself had virtually become a god by the time she died. Thus she enjoyed an almost holy status that might help to explain the phenomenal grandeur of the lion tomb.
It is only possible to conclude that we must await the unveiling of the rest of the mosaic with bated breath.

*Andrew Chugg is the author of The Quest for the Tomb of Alexander the Great and several academic papers on Alexander’s tomb.