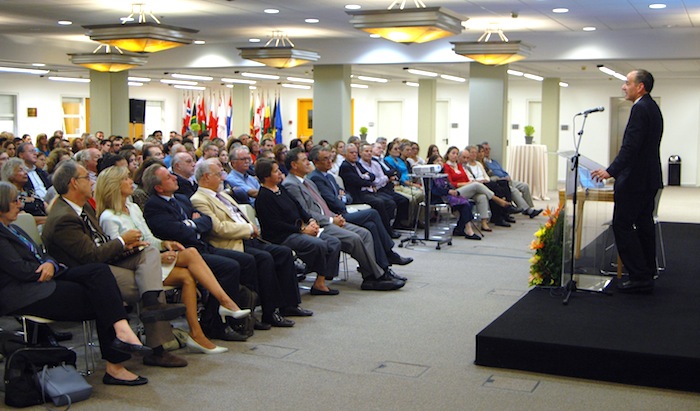 Cornell University Professor Dr. Barry Strauss spoke of the strengths of leadership found in Themistocles — the Athenian general and politician — during a lecture at The American College of Greece October 14, on the occasion of the annual Kimon Friar Lecture – and lamented the lack of leadership worldwide today.
Speaking to a packed audience in attendance for the 20–year-old lecture series aimed at promoting Greek arts and letters, Barry Strauss delivered a powerful lecture entitled “Cunning and Strength: Leadership Lessons from Themistocles,” about the Athenian personality credited with winning the Battle of Salamis for Greece in 480 BC. Dr. Strauss, who heads the history department at Cornell, referred to Themistocles as a “not one-sided personality,” outlining the features that made him stand out as a timeless symbol of leadership: ambition, foresight, innovation, strength, cunning, ruthlessness, and brazenness, among others.
He also described Themistocles as a “master of tactics” who could persuade Athenians to do what he wished, “cajoling them,” or even “threatening them” to follow what he had in mind, which often proved lifesaving. Had the Battle of Salamis been lost, it would have meant that the Golden Age of Pericles and the rest of what is known as the beginning of western civilization would not have occurred, Professor Strauss maintains. He adds that studying Themistocles is a lesson in leadership but also a “challenge.”
Professor Strauss described Themistocles as a “child of revolution” who turned revolutionary, much like Napoleon, and described both men as “brilliant, but flawed, with a lot in common.”
He also found similarities with the late Steve Jobs, the former Apple CEO, whose recent death was, according to Dr. Strauss, “a cultural moment in the US, which showed the yearning for heroes.” In comparing Themistocles and Jobs, Professor Strauss said that Steve Jobs, the “icon of entrepreneurship” was, like Themistocles, a genius, but was also known for his temper tantrums. Like Themistocles, he was also known for boasting of his accomplishments – much like the hero Odysseus too.
Due to the absence of ACG President Dr. David G. Horner, who was unavoidably detained in the US, DEREE Provost Dr. Thimios Zaharopoulos delivered the opening remarks, welcoming Barry Strauss, who has studied and written about Themistocles, not least in his book The Battle of Salamis: The Naval Encounter That Saved Greece—and Western Civilization (2004).
Introducing Dr. Barry Strauss, DEREE History Professor Dr. Haris Vlavianos spoke of a man who has been taking bold strokes in the muddy waters of history to successfully reach the finish line.
At the end of the lecture, in the Q and A session that ensued, when asked by the audience if current leadership was enough to combat the Islamic State, Dr. Strauss said he doesn’t claim to be an expert on modern politics, but maintained, “we face a leadership deficit.” When prodded to explain, Dr. Strauss reasoned that the lack of leadership in societies was due to societies’ complacency on account of its wealth and the observed lack of self-confidence. “However,” he added, “I am confident that should the need arise, there are people who can rise to the challenge today, but I hope things don’t get too drastic before great leaders are found.”
The annual Kimon Friar Lecture was organized by ACG’s Frances Rich School of Fine and Performing Arts and was open to the public.
Strauss, who is also Bryce and Edith M. Bowmar Professor in Humanistic Studies at Cornell University, has also been named Honorary Citizen of Salamis, Greece, and was thanked by members of the audience from Salamina, for being such a good “Salaminian.”