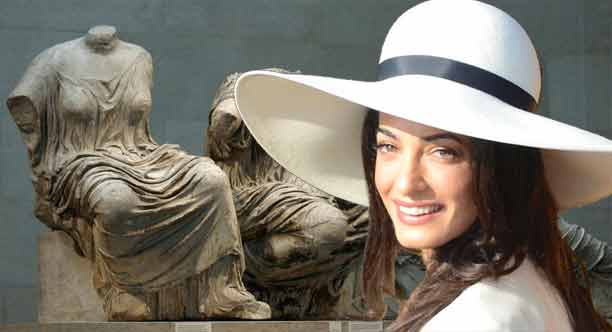 It seems that the spirit of ancient Greece has come to the rescue of suffering, debt-stricken, contemporary Greece. How else can one explain that soon after one of the world’s largest archaeological discoveries in Amphipolis, a group of prominent English lawyers is coming to Greece to help the Greek government recover the Parthenon marbles which the British Museum has indefinitely “borrowed.”
Until recently, 36-year-old Amal Ramzi Alamuddin was a barrister at Doughty Street Chambers, a powerful London law firm. The British-Lebanese woman was also an author and activist. As of last month though, she became internationally known as Mrs George Clooney. And as of today, let’s add that she is a philhellene too. Fresh from her honeymoon with one of the world’s most desired men, she rolled up her sleeves and came to help Greece recover the Parthenon marbles from Great Britain.
Her involvement with the case though had started back in 2011 when Australian archaeologist David Hill, head of the International Association for the Reunification of the Parthenon Marbles, asked cultural heritage issues lawyer Norman Palmer to explore whether Greece had grounds for legal recourse. Palmer in turn convinced Australian Geoffrey Robertson, one of the biggest names in similar international cases, to join the team and so began investigations into British law and the options Greece had. Two Greeks associated with Doughty Street Chambers seem to have played a crucial role in her decision to pursue the matter further: Award-winning cinematographer Phedon Papamichael and Andreas Michaelides, the law firm’s head of finances.
The troika of lawyers — to use a recently popular catchword — who arrive in Athens today with Alamuddin at the helm, will meet with Prime Minister Antonis Samaras, Deputy Prime Minister and Foreign Minister Evangelos Venizelos and Culture Minister Kostas Tasoulas to discuss the legal procedures Greece has to follow in order to bring back the famous sculptures and re-unite them with the remaining ones in the new Acropolis Museum.
This is a splendid opportunity for Greece to follow the legal steps needed in order to regain a precious part of its rich cultural heritage. So far, only vague moves have been made to that effect. For many years, the return of the marbles was a subject of academic discussion rather than specific, decisive actions. As it is often the case with Greek politicians, they form committees, the committees convene for hours, the participants talk forever and at the end nothing gets done. Several politicians in the past have claimed that they “fought” to bring the marbles back but the only fight they gave was to publicly blurb their wishes.
It is also a great opportunity for the struggling coalition government to achieve an important national success. If Samaras manages to bring the precious marbles back, it will be one of the biggest political victories ever. And it will certainly bring some much-needed votes. That probably explains the anxiety that prevails in the government headquarters over the famous lawyer’s visit. Allegedly, there is puzzlement over what gift to offer Mrs Alamuddin-Clooney.
In ancient Greek tragedies, when the protagonist found himself at an impasse, unable to come out of a life-threatening situation, the problem was resolved by the deus ex machina. A god in some form or shape was coming from above to save the hero or heroine. Let’s hope then that Mrs Alamuddin will act as a true philhellene and play the role of the deus ex machina who will indeed help Greece restore the sculptures and its wounded pride.