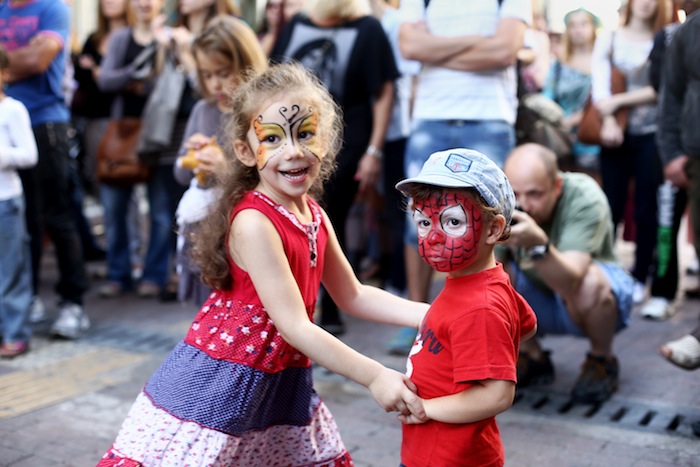 “Little Paris of Athens” is an Athenian art festival held each October in the Greek capital. Τhis year’s festival will take place October 9-19 in the center of Athens – specifically, the neighborhoods immediately surrounding Omonia square, Vathis square, Karaiskaki square and the Larissa train station. The street names in all these sections of Athens are French (Marni, Favierou, Maizonos, Hugo, Chateaubriand, Veranzerou, etc). For 10 days, Athenian urban culture, Greek tradition, the cultures of immigrants, travelers and visitors will all converge in “Little Paris of Athens’ in some of Athens’s most vibrant neighborhoods.
This initiative was first launched as an effort to inoculate culture and art in some of the most underprivileged areas of Athens. It has since evolved into a prestigious, international multi-festival. Last year, “Little Paris of Athens” was dedicated to Albert Camus for the 100th anniversary of his birth.
The “Little Paris of Athens 2014” is dedicated to the 100-year anniversary of the start of World War I, the belle époque and the missed chance at preventing the great conflict. To this day, the era just prior to the Industrial Revolution remains a source of inspiration for contemporary artists participating in the Athenian festival.
For 10 days, more than 500 artists will present their work in 30 selected venues (streets, squares, theaters, conservatories, schools, galleries, music cafes, cinemas and other alternative spaces). Theatrical performances, concerts, a variety of shows, art and photography exhibitions, street art, cinema, fashion, lectures and open discussions by a series of intellectuals will illuminate an era that has uncanny resemblances to the present.