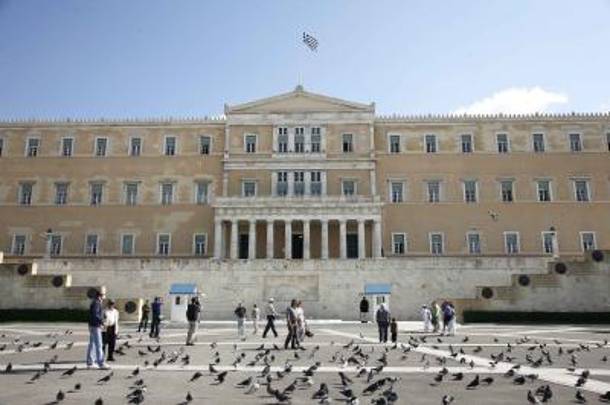 The three-day parliamentary debate that will lead to a vote of confidence for the government begins today and the MPs will cast their vote on Friday at midnight.
The first heated arguments have already started as SYRIZA opposition party reacted to the fact that Prime Minister Antonis Samaras will be absent from the parliamentary debate. Samaras, who is in Milan for the EU summit, appointed Health Minister Makis Voridis to be his representative in today’s discussion.
SYRIZA party members have expressed their dissatisfaction for the appointment of the minister of health, speaking of “a government set by Voridis”, while the internet was flooded with comments and photos from the time when Voridis was a member of right-wing LAOS party and, before that, member of the junta-friendly party EPEN.
The attitude of the opposition was denounced by government spokesperson Sofia Voultepsi, who after announcing that PM Samaras would be going to Milan for the EU summit on employment, commented ironically: “We assure SYRIZA that European leaders will definitely ask permission from Mr. Skourletis as to when to hold the next summit. ”
“Mr. Tsipras should not be worried, as he will be taught a lesson from the prime minister, once again in parliament,” added Voultepsi, and said that Antonis Samaras will deliver the closing speech before the vote.
Before Mr. Voridis, however, the opposition had targeted the other prominent member of the government party who also came to New Democracy from LAOS, parliamentary representative for New Democracy, Adonis Georgiadis.
SYRIZA has put Georgiadis in “quarantine” and several of its members refuse to participate in discussions with him after a statement he made a few days ago “that he would take his money out of Greece if SYRIZA was elected government.”
SYRIZA members have also stated that they would walk out of the parliament whenever Georgiadis addresses the plenary. This was one of the reasons the prime minister chose to appoint Makis Voridis to represent him instead of Georgiadis.
Another reason however, is that Samaras wants to stop possible losses of New Democracy MPs to right-wing parties. He believes that Voridis and Georgiadis can serve as the unifying link between the conservatives and the rightists of the party.

A Greek sitcom called ''Familie Foukara'' that was created by Greek actors and actresses who live in Germany has a new TV series airing on Youtube.
Diaspora