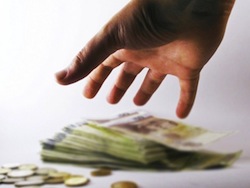 A man who has spent years deceiving elderly Greeks – among them the mother of Health Minister Makis Voridis – has just been arrested in the Menidi of Attica following a chase with police officers.
The minister of health’s mother gave the man 24,000 euros in August 2013 in order to “take care” of an outstanding debt.
The man, a 32-year old Roma, made a career out of deceiving the elderly. In partnership with two others, the man began his “business” in March 2013. After briefly researching the profile of their “victim” and gathering information on the economic shape of his or her relatives, the group would approach elderly Greeks and persuade them to hand over money to settle outstanding debts.
In some cases, the perpetrators drove the elderly to a nearby bank branch to withdraw cash en masse. In other cases, they went to homes and robbed elderly Greeks of money and jewelry at gunpoint.
The 32-year-old was caught by police in Menidi, where he was found driving an uninsured van.
When police stopped him, he attempted to run away. The police blocked the road with their cars, which the man subsequently crashed into. The man stands accused of robbery, fraud, theft and participation in a criminal organization.