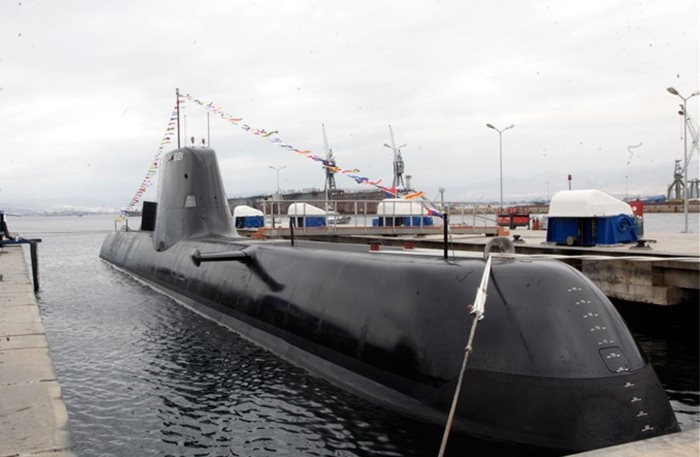 The Pipinos, the first submarine constructed in Greece, was launched on Monday in the Skaramangas shipyard of western Athens.
The christening of the Pipinos was attended by Greek Prime Minister Antonis Samaras, Deputy Prime Minister Evangelos Venizelos, Defense Minister Dimitris Avramopoulos, Shipping Minister Miltiadis Varvitsiotis, Chairman of the Greek Parliament Evangelos Meimarakis, Minister of Public Order Vasilis Kikilias, Deputy Minister of National Defense Fofi Gennimata and Archbishop Ieronymos.
Samaras used the occasion to exhibit how the government continues to have the will and power to safely lead the country into the post-crisis era.
The Pipinos submarine, a Type 214 diesel-electric vessel, is the first of three submarines commissioned by the Greek Navy to be built in the Abu Dhabi-controlled Hellenic Shipyards.
The Greek submarine was named after Andreas Pipinos (1780-1836), a famous seamen from the island of Hydra. During the Greek War of Independence, Pipinos fought by the side of Constantine Kanaris. He took part in the destruction of the Turkish fleet of Kara Ali in 1822 and in the 1824 battle of Gerontas, in which he was seriously injured while burning the Turkish flagship.
The Pipinos is 65.30 meters long and 7.90 meters wide. Its maximum submerged speed reaches 21 knots. Maximum surface speed is 10 knots.