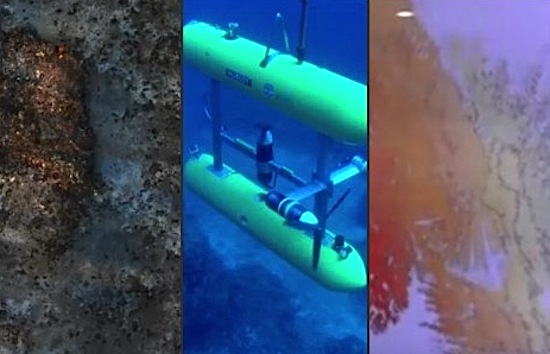 Despite the official attempt to keep a lid on the discoveries of the latest Antikythera shipwreck expedition, some details from a video showing the new discoveries have been leaked.
According to sources familiar with the video, the bronze spear that was discovered, was not part of any of the statues already been discovered. This has spurred hopes that a large statue will be found, to which the spear once belonged.
As for the golden ring, it is speculated that it was not part of the ship’s cargo but belonged to one of its passengers. According to reports, the ring was found next to a woman’s skeleton.
It has thus been speculated that perhaps it belonged to a bride, traveling from the East to Italy along with her dowry.
The amphoras were found 250 meters away from the wreck. This adds weight to the theory that there were in fact two ships that sank. However, a large part of the research team believes that the amphoras and surrounding artifacts were all part of the same ship.
The new expedition is focusing on an area of the main wreck that has not been thoroughly explored before: the ship’s prow.
The Antikythera shipwreck was first discovered at the turn of the 20th century by Greek sponge divers who pulled up a number of valuable ancient artifacts, including the famous Antikythera Mechanism, an extraordinary device that is believed to have been made around 100 BC.
Often described as an analog computer, it is the oldest geared mechanism ever discovered and is believed to have been used to make astronomical calculations.
Prior to its discovery, mechanisms of similar complexity were not known to have been created until the 14th century.
The latest expedition begun in 2012 with a new survey of the area to relocate the wreck and the team began diving operations about two weeks ago. The team of Greek-American researchers are utilizing a pressurized robotic ‘exosuit’ to explore the wreck and surrounding area.
The 1.5 million dollar state-of-the-art suit allows divers to dive in greater depths and remain far longer than simple scuba gear would allow (the Antikythera shipwreck is located at a depth of 55 meters).
The suit, however, has yet to be deployed as weather conditions have been too rough. The hope is that further important discoveries will be made, perhaps even including a second Antikythera Mechanism.