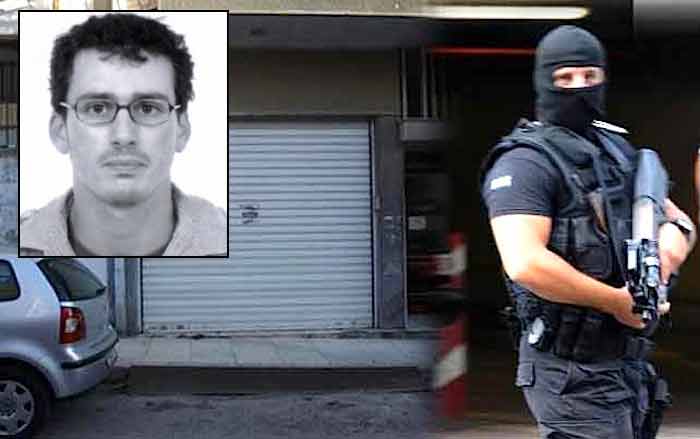 A young man was arrested on Wednesday in the Vyronas neighborhood of southeast Athens as part of a police operation to stop an impending terrorist attack against the Greek capital.
According to Greek Police, the man arrested is Andonis Stamboulos, born in February 1983. Making his personal data public, police forces are asking for further information regarding the alleged terrorist.
Police are saying that Stamboulos was armed and dangerous and totally prepared for the possibility of his arrest. He was following the urban guerrilla warfare manual concerning a potential arrest.
Police say it became apparent since his arrest that he was not just an ordinary associate of known terrorist Nikos Maziotis. He had no cell phone in his possession and spoke to the policemen in Italian, pretending to be a foreigner.
The fact that he had schematics and notes about his alleged targets in his possession, is interpreted by the police as an indication that the terrorist strikes were about to happen very soon.
Since his arrival to the Anti-terrorism Squad’s holding cells, Stamboulos has been keeping his head between his hands, allegedly so as to avoid his picture being taken, and appeared to be stalling the investigators, in order to possibly buy some time for his accomplices.
Another indication of his alleged guerrilla training, was the fact that he refused to drink water offered to him by the police for more than 24 hours, and only drank from a bottle offered to him by his attorney.
He offered no identification to the prosecutor handling the case, claiming that he would consider whether he would give his name to the prosecutor on Sunday. He only spoke Italian with his attorney, making the interrogators curious and leading them to ask for data from the Italian authorities.
The Anti-terrorism Squad are looking for the possibility that Stamboulos was a liaison between domestic guerrilla warfare groups and Italian ones.
The man was arrested at a cafe across the street from a garage that served as a shelter for Revolutionary Struggle, an anarchist terrorist group headed by Maziotis. While Maziotis currently sits in jail, his partner, Paula Roupa, a fugitive, has pledged to spearhead the group’s activities. Greek Police have been able to ascertain virtually nothing about the young man arrested on Wednesday. He has no previous criminal record and has never raised police suspicion in the past. He was possibly a recent Revolutionary Struggle recruit.
In a press conference on Thursday, Public Order and Citizen Protection Minister Vassilis Kikilias and Greek Police Chief Lieutenant General Dimitris Tsaknakis publicized details regarding the thwarted terrorist operation. Notes in the man’s backpack indicate that a major attack was being planned for October 4, the founding anniversary of the ruling New Democracy party. An escape plan discovered in the Vyronas garage suggested additional strikes against notable Greek businessmen and shipowners: Theodoros Veniamis, Evangelos Marinakis, as well as the head of the Association of Greek Industries, Theodoros Fessas, and his wife.
The suspect is Greek but also speaks Italian. He is of stocky build and has refused to provide any details regarding his identity or degree of involvement in the Revolutionary Struggle. He is being held on charges of police resistance, grievous bodily harm, as well as the creation and possession of an explosive device. The police were impressed by his strength; it took twenty officers to hold him down and fingerprint him.
He first drew police attention ten days ago, when they received a tip about a potential arsenal at a garage in Vyronas. The garage’s owner informed the police that he had leased out the garage in June 2013 to a Greek citizen. The garage’s leasing agreement was found to carry Maziotis’ fingerprints. Inside the garage, police found the same car storage roof rack that had been used during Revolutionary Struggle’s attack on the Bank of Greece last April. It was immediately evident that the garage had been leased by members of the terrorist group.