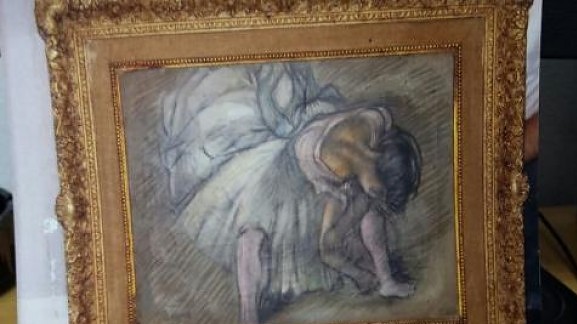 An international manhunt is now underway to recover a painting attributed to the French impressionist Edgar Degas. “Ballerina Adjusting Her Slipper” was stolen by a group of thieves earlier this week in Limassol, Cyprus. Cypriot authorities are making organized efforts to retrieve the painting, the price of which is estimated at some 30 million euros.
International media has shown heightened interest in the case. The painting is one of Degas’ most famous works. BBC, ABC, Financial Mirror and other key global media outlets are following developments closely.
The painting was stolen from the house of a 70-year-old Cypriot citizen. He was initially approached by two Greek-Cypriot men who visited his home, claimed to be antique collectors and toured his private art collection.
Later that evening the man’s home was robbed; among other objects of value, the Degas painting is now missing. It is purportedly uninsured.
Two Greek-Cypriots were arrested immediately after the case broke. Authories have announced that they have been looking for a Russian entrepreneur since yesterday. Two additional thieves are thought to have been involved in the heist.