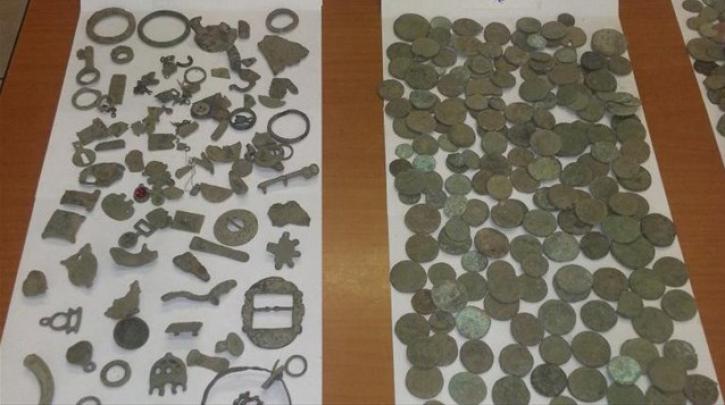 On Monday, Greek police announced the arrest of a 72-year-old Greek man charged with antiquities smuggling.
Investigation of the man’s home in a village near the city of Alexandria in northern Greece revealed 1,061 ancient copper coins. Most date from the Hellenistic period – the third to first centuries BC – the Byzantine period – 330 AD to 1453 AD – and the Ottoman period – the 15th to the 19th centuries AD. Police said that the coins were seized on Sunday, along with 30 silver coins dating to the same periods, 16 copper rings, as well as precious jewels of the Byzantine and post-Byzantine eras.
Police also found an assault rifle, seven pistols of various calibers, six handguns, two hunting rifles, 15 metal detectors, two binoculars, two gas masks and a compass.
The confiscated antiquities were immediately examined by archaeologists, who concluded that they fall under the jurisdiction of laws concerning the protection of antiquities and the cultural heritage of Greece.
The 72-year-old man had been involved in similar activity in the past. He is being accused of violation of cultural heritage law, possession of illegal weapon, as well as embezzlement.
Antiquity smuggling is a pervasive problem in Greece, particularly since the early years of the economic crisis. The Greek police make dozens of arrests per year in connection with the trade.