The Upcoming Troika Negotiations: A Case of Hot Potatoes? 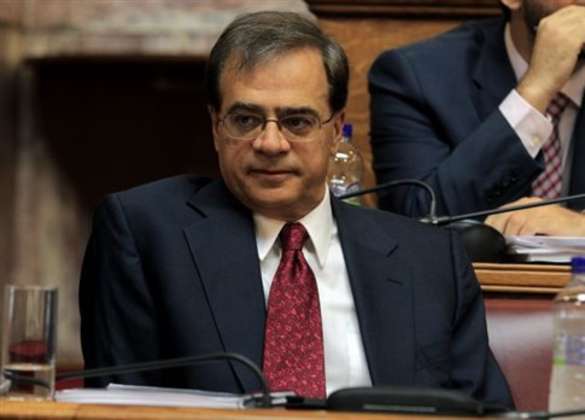 The Troika’s upcoming evaluation of Greece’s financial recovery will include a helping of “hot potatoes” for the Greek government – that is to say, the need to address heated topics such as retirement age, public sector layoffs and health care costs.
Today, a meeting at the Maximos Mansion between Greek Finance Minister Gikas Hardouvelis and Prime Minister Antonis Samaras has been scheduled to address any last-minute “fine tuning” required for the Troika’s arrival to Athens tomorrow, September 30.
The finance minister will have consecutive meetings with all ministers scheduled to participate in the negotiations. The Greek team will attempt to map the critical areas of the upcoming negotiations and hopes to speculate on lenders’ demands.
After last night’s meeting with Labor Minister Yiannis Vroutsis on issues such as lay-offs and retirement age, Hardouvelis is now preparing for tomorrow’s Troika meeting. The agenda of meetings for today includes the following:
A meeting with Minister of Justice, Nikos Dendias, and Minister of Development, Charalambos Athanasiou, on the issue of “red loans” and the new bankruptcy law.
A meeting with Administrative Reform Minister Kyriakos Mitsotakis on the issue of the evaluation of public employees and new layoffs in the public payroll.
A meeting with Environment Minister Yiannis Maniatis on energy issues, such as the creation of NOME auctions for quantities of electricity from lignite and hydro units from the Public Power Corporation, the opening of gas markets by abolishing the monopoly of local suppliers and the splitting up of the management and marketing network of three gas companies in Attica, Thessaloniki and Thessaly.
A meeting with Health Minister Makis Voridis on the issue of public health costs, one of Greece’s lenders’ biggest concerns, as mismanagement and other health care deficits continue to threaten the primary surplus.
The government however has drawn “red lines” in the following two areas:
The labor minister’s negotiation red line is that he will not agree to any cuts on primary pensions or any changes in age limits for retirement. He does not want fiscal demands to affect Greek family planning.
Age limits: The government does not want to change retirement age limits. For those entitled to pension from January 1st, 2013 onwards, full pension shall be paid at the age of 67 or alternatively at 62 years, but with 40 years of insured employment. The government has declared that any new interventions to retirement age limits will lead automatically to the retirement of thousands of employees, a move that could have a dramatic impact on pension funds.
Pensions: The government refuses to reduce pension payments by primary insurance funds. Vroutsis will indicate that a number of laws have resolved this issue. This applies to those who retire from 2015 onwards, as a new method of calculating their primary pension has been determined. Regarding supplementary pension funds, from 2015 forth the clause of “zero deficit” will apply. This means that depending on the financial situation of each insurance fund, both lump sum payments and supplementary pensions will be adjusted accordingly.
On the issue of lay offs, the state has requested extra time in order to evaluate the changes that have been made​, despite the Troika’s insistence on new legislation. For trade union law changes, the discussion remains open. A meeting between the minister and social partners with the General Director of the International Labor Office in Geneva has been scheduled for tomorrow in order to reach consensus.
Furthermore, Giannis Vroutsis is traveling to Geneva today in order to attend a meeting with the International Labour Office (ILO), a program the government has commissioned to conduct a study on the changes to collective lay offs and union rights. The Greek side is going to ask for extra time for negotiations on this matter, as it believes that the report will prove that the layoffs demanded by the Troika cannot apply to any country in which unemployment hovers at 27%.