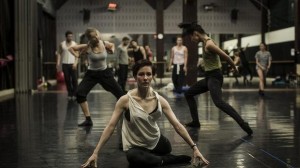 The performance “Louder Than Words,” created by Greek choreographer Andonis Foniadakis, premieres in Sydney next week.

Foniadakis has choreographed for some of the world’s most distinguished dance companies, including the Martha Graham Dance Company, Geneva Ballet and Cedar Lake Contemporary Ballet. Last year, he collaborated with film director Darren Aronofsky when he worked as movement director on the film “Noah,” starring Russell Crowe.

“Now, Foniadakis has been commissioned by the Sydney Dance Company of Australia to create a 30-minute performance, Parenthesis, in less than four weeks. In reality, he reckons he has had just 18 working days.
There is nervous tension in the air in the rehearsal room, but most of it is coming from the bespectacled Foniadakis, who is propped up on a small stool, legs crossed and stroking his chin stubble. The dancers are limbering up, warming their muscles, ready to prove to the choreographer that his work is done,” The Sydney Morning Herald daily reported.

“It’s an extremely short period of time, but then again, I have a lot of experience working in these conditions,” Foniadakis said. “I knew nobody from the company until one day I received a phone call from the company’s artistic director and he offered me a job, so I came here. I didn’t have any connection to Sydney before that.”
Australian audiences thrive on physicality, which is a good fit with Foniadakis’ demanding and expressive choreography.

Those 18 days of preparation were both mentally and physically taxing for the dancers, and performer Charmene Yap said: “Every day I remember for those three weeks, I went home and was exhausted … It was dynamic and incredibly fast. I had moved fast but this was a whole new level.”

Parenthesis, said Foniadakis, is about “a struggle of coming together and growing apart.” The work aims to explore disorder, discomfort and chaos when balance is disrupted.

Foniadakis believes his time is Australia has helped him take his choreography to new and exciting physical limits. “I really love the capacity of humans to go over the reality and conditions of the human body. I like to bring something that is related to the primitive and instinctive center of each one of us.

“I try to bring a kind of situation that has an emotion behind it, so it takes a lot of time for them to understand what I want from them and how I want them to dance.”

Despite some “stressful moments” in rehearsals, the performers did manage to catch a glimpse of Foniadakis’ lighter side, albeit very briefly.

“He was very focused and even when he was walking in the hallways I believe he was always thinking about the piece,” Yap said. “There was one time, though, when he would crack a smile and you’d think, ‘Oh, there’s that side of you’. I think he does have that side of him but we only saw little glimpses of it.”

Next week, when “Louder Than Words” premieres in Sydney, Foniadakis will settle down in a cafe by the Seine, perhaps with a glass of red, to watch the opening night of the performance on his laptop. Only then, will his work be done, the article concludes.

“Louder Than Words” will be at the Sydney Theatre from October 4-18.