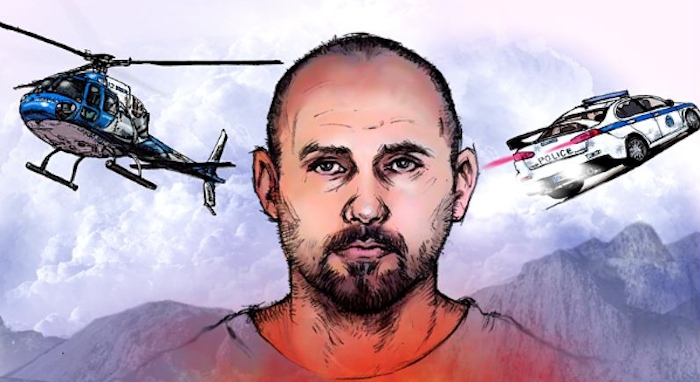 A Hollywood-based journalist has spent a year working on the movie-like story of Greek bandit Vassilis Paleokostas, the Greek Reporter can reveal today.

Paleokostas, 46, famously escaped from Korydallos prison in a helicopter for the second time in 2009, following an equally cinematic escape in 2006. The bank robber and industrial kidnapper is famous not only for eluding the police for decades, but for reportedly giving stolen cash to the poor.

Jeff Maysh, a British writer based in Los Angeles, spent time in Athens, Trikala, and the mountain regions of Greece where the super-criminal is rumored to be hiding, for an investigative story out today on the BBC News Magazine website.

“This is a remarkable story, and an incredibly difficult one to research,” Maysh told the Greek Reporter, “Paleokostas remains on the run, and those closest to him were careful not to give away his position. That said, I was able to get unrivaled access to his family, friends, and inmates of Korydallos prison.”

The journalist spent time in Greece between February and March of this year, interviewing Paleokostas family members and associates. Maysh was detained by police in Kalambaka, while taking photographs of the scene of the 260 million Drachma robbery which became the largest in Greek history, in 1992. He is the first journalist to go inside Korydallos.

In the article, Maysh speaks directly to Costas Samaras, Paleokostas’ mentor, who is locked up in Korydallos’ psychiatric ward. In his first face-to-face interview in years, Samaras told the BBC about committing the largest cash bank robbery in Greek history, with Paleokostas:
“As we were driving the getaway car [from the bank], we heard on the radio that we left 90 million [Drachma] behind,” Samaras told the BBC. “Paleokostas joked, ‘Shall we go back?’ Samaras revealed that cash from that robbery was given to immigrants on the street.

The BBC story, which features a movie-style poster with explosions, car chases, and of the course the two helicopters used in Paleokostas’ two prison escapes, was released today. The more interesting revelations include the claim that Paleokostas and his sidekick Alket Rizai used walkie-talkie cell-phones to plan their escapes, and that Paleokostas may have had plastic surgery to escape the law.

“Wigs and makeup found in one hideout suggest Vassilis could even transform himself into a woman, at a pinch,” the story reports.