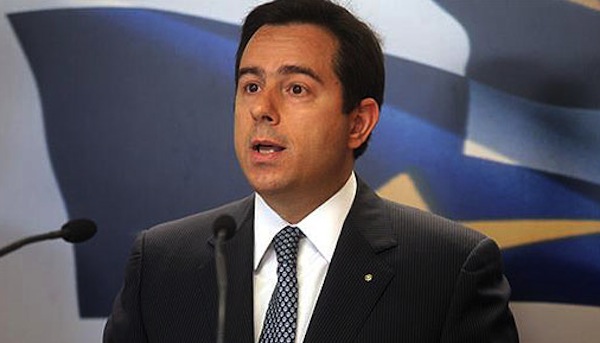 “In comparison with previous years, we see increased interest for the participation of Greek enterprises that have come here in London. The market acknowledges there have been great changes in the Greek economy, both structural and fiscal. Changes that have allowed the country to return to positive growth rates in 2014,” Deputy Development Minister Notis Mitarakis told ANA-MPA shortly after the completion of the first day of the 9th annual Greek Road Show in London.

Mitarakis said that a total of 31 Greek-listed enterprises participate in the Road Show and that meetings with international fund managers were expected to surpass every previous record.

“The basic message we gave as a government is that we are determined to continue the road of reforms so that the sacrifices of the Greek people would allow us to achieve high growth rates in the coming years. The most important, however, is to reduce unemployment, which is the biggest problem the country is facing right now,” he added.

“Economic growth returns to Greece ,” said George Zanias, President of the Hellenic Bank Association, during a speech on Thursday, adding that the dynamism of Greek banks has been restored while risks have been significantly reduced for the economy. Zanias stressed that Greek banks will meet the European Central Bank’s stress tests.

Speaking to ANA-MPA, Kostas Botopoulos, President of the Greek Capital Market Commission, said that “this year in London has several particularities. First, there is a strongly increased interest. We are talking about a record of interest, meetings and participation of foreign investors, a very important thing for us. Second, it is the time that the Road Show is held. Nowadays, no one questions that Greece is on a very good track, macro-economically speaking.” He added that foreign investors acknowledged the country’s growth outlook. “What we discuss is how fast can they come and what is their relation with political developments. Therefore, our job as institutional agency is to give them the real picture and to say that, in our opinion, political developments do not affect the course of an improving Greek economy indirectly.”

“Today is the opportunity for foreign investors to come to Greece. When they ask us what is the right moment, the answer is now,” Botopoulos said.

Socrates Lazaridis, Chief Executive of Hellenic Exchanges Group, told ANA-MPA that the aim of a Road Show is to bring the feeling of the global capital market to Greek businessmen and to offer details and information over investment opportunities in the Greek capital market.
(source: ana-mpa)