Naomi Klein Talks About Meeting with Alexis Tsipras in Athens 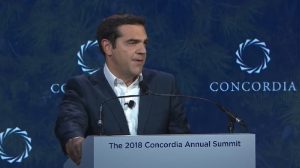 Naomi Klein’s book “This Changes Everything: Capitalism vs The Climate” is expected to hit US bookstores tomorrow. In excerpts published in NATION magazine, the Canadian writer talked about a meeting she had with Alexis Tsipras in Athens.

“At the time, Tsipras’ party, SYRIZA, was putting up a fine fight against austerity. Yet it was struggling to articulate a positive economic vision of its own. I was particularly struck that the party did not oppose the governing coalition’s embrace of new oil and gas exploration, a threat to Greece’s beautiful seas as well as to the climate as a whole,” she stated.

“When we met the next day, Tsipras was frank that concerns about the environmental crisis had been entirely upstaged by more immediate ones.” “We were a party that had the environment and climate change in the center of our interest,” he told Klein. “But after these years of depression in Greece, we forgot climate change.”

The magazine highlighted the Canadian writer’s opinion: “This is, of course, entirely understandable. It is also a terribly missed opportunity—and not just for one party in one country in the world. The research I’ve done over the past five years has convinced me that climate change represents a historic opening for progressive transformation.”

“Rather than the ultimate expression of the shock doctrine I wrote about in my last book, climate change can be a “People’s Shock,” a blow from below. It can disperse power into the hands of the many, rather than consolidating it in the hands of a few, and it can radically expand the commons, rather than auctioning it off in pieces,” she further stated.

“But none of this will happen if we let history’s knock go unanswered—because we know where the current system, left unchecked, is headed. We also know how that system will deal with serial climate-related disasters: with profiteering and escalating barbarism to segregate the losers from the winners. To arrive at that dystopia, all we need to do is keep barreling down the road we are on,” the article ended.

Turkey announced on Monday that it will conduct a large-scale naval exercises in the Mediterranean and the Aegean Sea between February 25 and March 7.
Ancient Greece