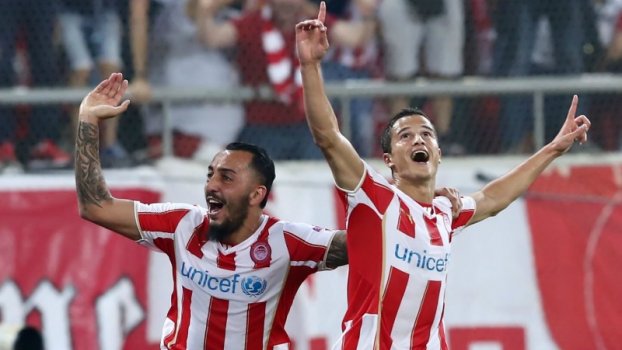 Olympiacos grabbed its first three points in the UEFA Champions league after smashing Spanish Champions Atletico Madrid 3-2 in Group A’s opening fixture in the Giorgios Karaiskakis in Piraeus.
In what can only be described as a majestic night for the Greek Champions, Arthur Masuaku, Ibrahim  Afellay and Kostas Mitroglou scored crucial goals to clinch their first win and move Olympiacos to the top of their group where Juventus also stands after beating Malmo FF at home 2-0 with two goals from Carlos Tevez.
Besides Diego Simeone (Atletico’s coach) no one else from the Spanish side took this game really seriously before kick-off. As a result, within the first thirty minutes, they were two goals down. They might have been crowned the Primera Division Champions a few months back and just last Saturday beat Real Madrid in the Santiago Bernabeu 1-2, but that didn’t seem to scare the Greek giants.
Being penalized and having to watch the game from the stands disallowed D.Simeone from supporting his players with his own unique erratic way, giving the upper hand to Mitchel in the game of chess that was played between them while the game was unfolding. Tactical geniuses as they are, both knew when to press and when to calm the play, however it came down to the effortful display of Olympiacos defensive line that blocked most of Atletico’s attempts to create. Add goalkeeper Roberto’s magical saves and there you have it: A 3-2 win against last year’s Champions League’s finalists.
I’ve said in articles before that no team steps in a game not hoping to win, so when the game is part of a tournament, the goal is always to win till either disqualified or have won the trophy. Many consider that Olympiacos is in it aiming for third place since they have to fight for the first two qualifying spots against Italian Champs Juventus and Atletico Madrid, but after today’s result even the unfaithful have to change their opinions.
After a decade of embarrassing results in their first years participating in the UEFA Champions League, Olympiacos have finally become a steady club who has the ability to challenge all of Europe’s top teams. Congratulations to them tonight and may the future bring out the best of them. 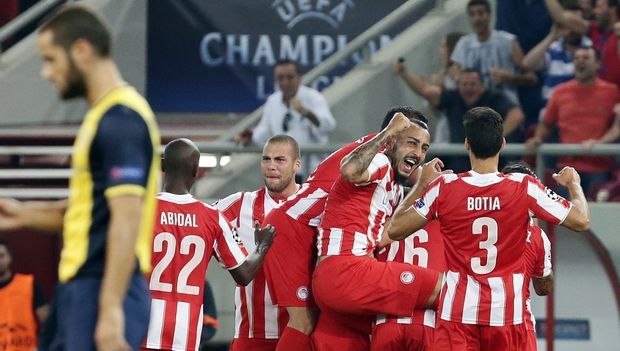 In the rest of today’s games, for Group B Liverpool managed to secure a 2-1 victory against Ludogorets with a stoppage time penalty kick by Steven Gerrard. Balotelli had opened the score with his first goal this season before Dani Abalo equalized in the 90th minute.  For the same group, Real Madrid demolished Basel 5-1 with goals from all of its top stars (Benzema, C.Ronaldo, G.Bale, J.Rodriguez).
In Group C, Monaco beat Bayer Leverkuzen 1-0 with a goal from Joao Moutinho in the 61st minute while Benfica lost at home to Zenit St. Petersburg 0-2.
Finally for Group D, Borussia Dortmund had newly signed Ciro Immobile on fire, who scored in the first half and with the help of Aubameyang who delivered a second, took down group favorites Arsenal 2-0. Galatasaray and Anderlecht grab a point each after drawing 1-1
The article is constantly updated…