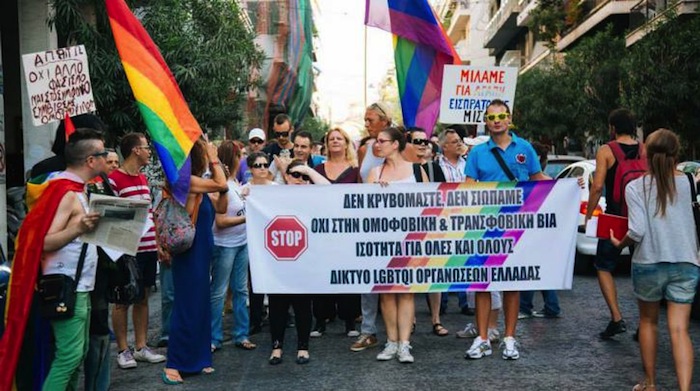 ATHENS, (AP) – Gay rights protesters gathered outside Greece’s parliament late Friday after the government said it would delay legislation allowing civil unions for same-sex couples. The decision came despite a European court ruling that found Greece has been discriminating against gays.
About 500 people joined the peaceful protest in central Athens as lawmakers prepared to vote on an anti-racism bill.
Justice Minister Haralambos Athanasiou said civil partnerships had been left out of the legislation because further study was needed on how the partnerships would affect the tax and social insurance system, as well as family law.
“I think it is an issue that requires us to respect the detail and the sensitivity involved … and should not be added on to the legislation we are currently discussing,” Athanasiou told parliament.
Lawmakers on Friday approved the bill to facilitate the prosecution of people who incite violence on the basis of race or sexual orientation, but a detailed debate on separate articles in the draft legislation will continue next week.
Last November, the Council of Europe’s Court of Human Rights ruled that Greek legislation was discriminatory, and ordered the country to pay damages to four gay couples who took the case to the court in Strasbourg, France.
But the issue is politically sensitive in Greece, where several prominent members of the Greek Orthodox Church as well as members of the ruling conservative party oppose gay partnerships, arguing they would undermine the institution of family.
Another 162 gay couples from Greece – some present at Friday’s rally – filed a similar complaint in the international court earlier this year to pressure the government to change the law.
“I think the changes will happen step by step, as they did in other countries like (Britain), where first there was civil partnerships, then marriage equality, and then changes to adoption,” said Tom Koukoulis, one of the plaintiffs who attended the demonstration with his partner of two years, Aristidis Paraskakis.
“It’s about the right to … visit a relative in hospital, to file a joint tax declaration, and all the rest,” Koukoulis said. “We do think it is going to happen because we are on the right side of history.”
Copyright 2014 The Associated Press. All rights reserved. This material may not be published, broadcast, rewritten or redistributed.