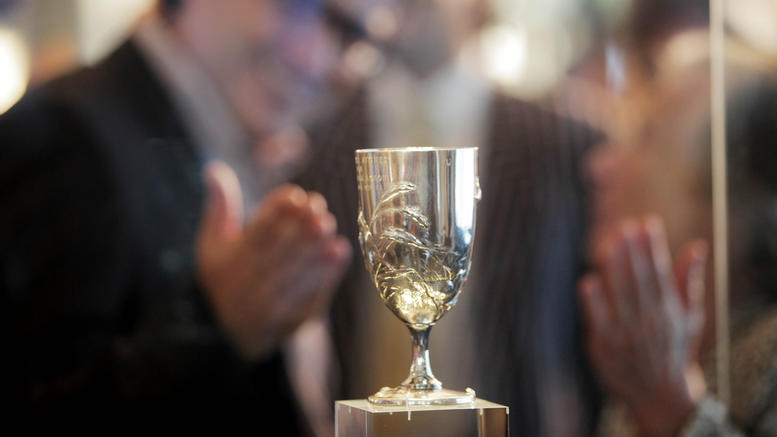 The Stavros Niarchos Foundation announced that the Silver Cup awarded to Spyros Louis, the first Marathon Winner at the inaugural Modern Olympic Games in Athens, in 1896, has been temporarily moved to Switzerland. The cup will be exhibited at the Olympic Museum in Lausanne, ahead of the international marathon to be held in the Swiss city on October 26.

The historic cup, a symbol of the Olympic ideal and inextricably associated with the First Olympic Games, will remain at Lausanne’s Olympic Museum for six months, allowing visitors from across the world to admire the important artifact and learn about its history.

The cup was designed by Michel Bréal and was awarded to the Greek marathon winner at the inaugural Modern Olympic Games in Athens, in 1896. In 2012, the cup was acquired by the Stavros Niarchos Foundation at an international auction. In doing this, the Foundation wanted to contribute to the repatriation of this extremely significant artifact for the history of Greece, with the sole aim of making it accessible to the Greek people in perpetuity.

Faithful to its original commitment of September 2012, the Foundation arranged for the public to have free access to the Silver Cup by placing it at the Acropolis Museum. During the last two years (September 2012-August 2014), more than two million people of all ages and nationalities visited the Acropolis Museum and had the opportunity to see the exhibit up close and be inspired by its symbolism. It is worth mentioning that among those visitors, at least 300,000 were students from Greece and abroad.

Following its highly successful residence at the Acropolis Museum for two consecutive years, the Spyros Louis Silver Cup will now move, for a limited time, to the Olympic Museum in Lausanne, which boasts the largest Olympic Games archive in the world and is one the most important tourist attractions in Lausanne with thousands of visitors each year. In this context, the Olympic Museum offers the ideal environment in terms of content, accessibility but also in terms of security, in order for the cup to have a rightful place among the other commemorative artifacts of the Modern Olympics, promoting through its symbolism, the power of Greek history and the Olympic ideals.

The cup’s exhibition will be accompanied by audiovisual and printed informational material.

Following the six-month display period, it will return to Greece and its place at the Acropolis Museum; in an area accessible without admission fee. From 2016 onwards, when the construction of the Stavros Niarchos Foundation Cultural Center (SNFCC) will be completed, the historic cup will be on permanent display at the SNFCC.