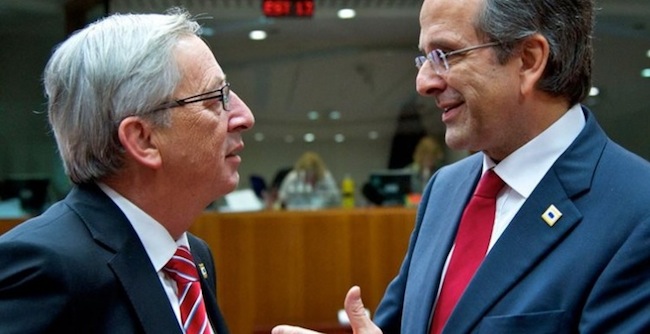 Greek Prime Minister Antonis Samaras met on Saturday in Brussels with the new president of the European Commission Jean-Claude Juncker on the sidelines of the European Peoples’ Party (EPP) Summit.
According to government sources, Samaras and Juncker exchanged views on the current issues as well as Juncker’s preparations regarding the persons and the responsibilities that will form the new Commission.
Moreover, a special reference was made on the positive developments in the Greek economy as well as the positive prospects ahead of the next evaluation of the Greek program and after its completion.
The Greek Prime Minister, entering the Summit, said: “I just want to say that there’s very heavy turbulence in Ukraine and we have to be both decisive and careful. On the other hand, we are going to elect for Europe those who want, care and work for stability and the enhancement of a growth oriented Europe, which is one of the most important items on the agenda tonight. Thank you.”
(source: ana-mpa)