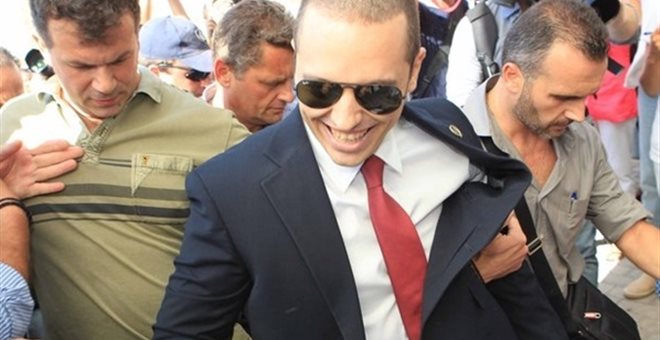 The swearing-in ceremony of the new Athens municipal administration members took place late this afternoon, under tight security, at Technopolis in Gazi.
Anti-fascist organizations and Golden Dawn party members congregated in relatively small numbers outside the venue on Pireos Street. Some members of Antarsya party also gathered at the junction of Pireos and Iera Odos streets.
Jailed Golden Dawn MP and now Athens councilor Ilias Kasidiaris arrived from Korydallos prison in a police van shortly after 16.30 in order to be sworn in at the ceremony. Ourania Mixaloliakou, daughter of jailed Golden Dawn leader Nikos Michaloliakos, was also sworn in.
“We wanted to put the thieves in jail, but they got to us first. It doesn’t matter though, because Greece always wins in the end,” Kasidiaris said while being escorted into the building by plainclothes police officers, who flanked him throughout the swearing-in ceremony.
Left-wing city council member Petros Constantinou said authorities shouldn’t have granted Kasidiaris prison leave.
“I will fight for a city of democracy, freedom and solidarity, without neo-Nazis and racism,” he said.
Greek Police have established security zones and only individuals by special invitation could enter the ceremony. Anyone without invitation was denied access, which was the case for Golden Dawn MP Ilias Panagiotaros.