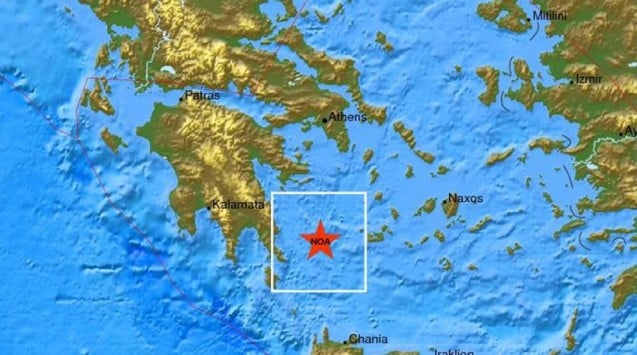 An earthquake with magnitude 5.6 occurred between the Peloponesse and the Cyclades in Greece at 6:44 am on Aug 28, 2014.
The epicenter was located beneath the seabed about 140 kilometers (86 miles) south of Athens and near the island of Milos.
There have been no reports of injuries or damages, however, the shock was widely felt in Athens and Crete.
The U.S. Geological Survey gave a preliminary magnitude of 5.6, while the Greek Institute of Geodynamicsr gave it as 5.7.

The Mediterranean region is seismically active due to the northward convergence (4-10 mm/yr) of the African plate with respect to the Eurasian plate along a complex plate boundary. Greece lies within this seismically active area.
Earthquakes have historically caused widespread damage not only in Crete, but also across central and southern Greece, Cyprus, Sicily and other neighboring regions.
In January, a series of strong earthquakes on the western island of Kefalonia damaged hundreds of homes and injured more than a dozen people.