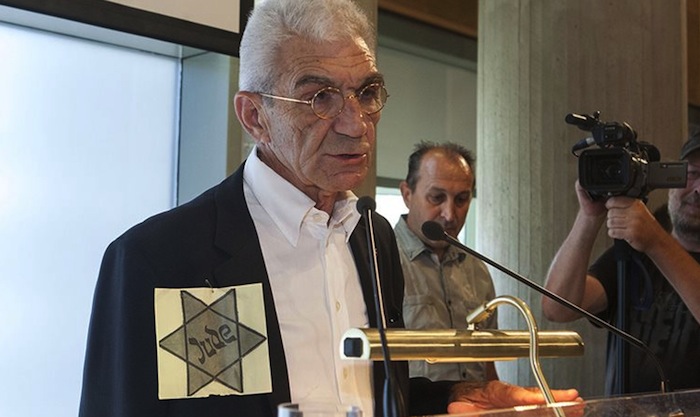 Thessaloniki Mayor Yiannis Boutaris wore a yellow Star of David in his swearing-in ceremony.
Protesters exchanged slogans and insults with Golden Dawn supporters who sat in the opposite public gallery at the municipal council. Boutaris pleaded with both sides to calm down.
Boutaris came to the ceremony wearing a yellow Star of David, wanting to underscore his antifascist sentiments as mayor of a city that boasted a vibrant Jewish population before the holocaust.
Golden Dawn supporters broke out in applause when Golden Dawn member and municipal counselor Artemis Matthaiopoulos entered the chamber, shouting “no jail for nationalists” with the antifascists shouting in return “Not in councils, nor anywhere, bust fascism at every neighborhood.”
Three banners had also been raised in the chamber by two antiracist and antifascist groups and a group representing workers of the city’s psychiatric hospital.
“The municipal council is not a coffee-house or soccer stadium,” said Boutaris, who prevailed easily in May’s elections, winning 58.1% of the vote in the second round, thus securing a second term.
His decision to wear the yellow Star of David carries significant symbolism as almost 90% of Thessaloniki’s Jews were killed during World War II after the Nazis transported them to concentration camps, leaving only 10,000 survivors.

Greek Island of Milos is Inspiration for Latest Dior Collection