GRNews
GreekReporter.comAustraliaTennis Dynamite Nick Kyrgios Gets Past US Open's First Round

Tennis Dynamite Nick Kyrgios Gets Past US Open’s First Round 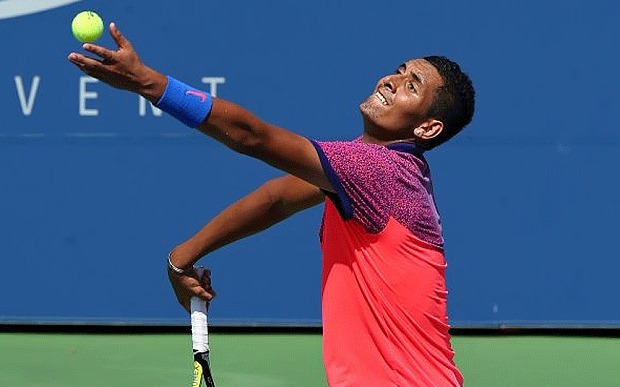 Young Greek-Australian Nick Kyrgios got past Mikhail Youzhny in four sets making an incredible start at the tennis US Open in New York.

The 59th world seed sent out a group message that he’s not just another child star with a limited career span, but a player who can achieve greatness after his overwhelming win over two-time US Open semi-finalist (06′ and 10′) Mikhail Youzhny.

The Wimbledon quarter-finalist took three hours and three minutes to overcome his 32-year-old opponent as well as the blimming heat, a left arm injury but also an umpire set on disqualifying him, rightly so in my (writer’s) opinion, as Kyrgios decided to smash the ball out of the stadium in frustration and then swear in front of the referee’s presence for a disputed call. As a result, the star teenager was penalized a game in the fourth set, a phenomenon not widely experienced in tennis.

The 19-year-old took a couple of breaks during the first and third set to have the physical therapist come and give him a hard rub on his overused forearm.

Kyrgios, who will soon face Andreas Seppi from Italy for the second round of the US Open, clinched the first set after serving at 6-5 and 40-0. He double faulted the first out of his three set points, but aced the second and took the lead.

In the 2nd set, his stinging backhand came to life, breaking the Russian twice and lifting the score to 3-1 games, before the latter swinging back with three straight games to lead at 5-4. Kyrgios leveled at 5-5, kept his serve at 6-6 and then opened with a 5-1 advantage in the tiebreaker, eventually snatching his second set (7-4).

Michael Youzhny took advantage of the youngster’s hypnotic plays in the third set, breaking him twice and regaining hope and confidence with an emphatic 2-6 set, to later see his stubborn but talented opponent showing maturity beyond his years storming through the fourth set’s tiebreaker (7-1) and together the ticket to the tournament’s second round.

Nick Kyrgios’ next game will be held on Wednesday against Andreas Seppi who took out Ukrainian Sergiy Stakhovsky in straight sets 6-3, 6-1, 6-4.