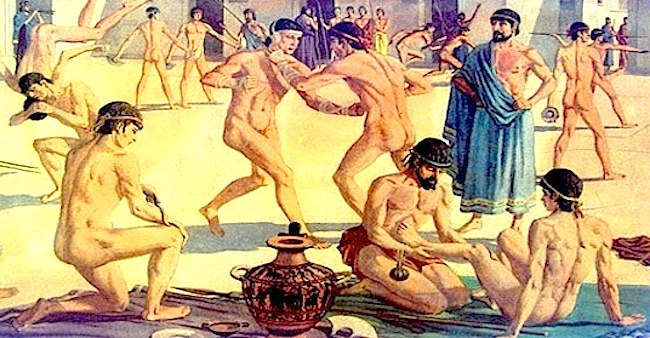 Middle-age spread is a problem that worries millions of people as they get older. After 35, the body is starting to lose its ability to remain in shape and fat is usually collecting around the abdomen. Unhealthy diet, sedentary lifestyle and lack of physical exercise aggravate the problem.
It appears though that it is a problem of the contemporary era, as people in ancient Greece didn’t suffer from middle-age spread.
Wars, diseases and poor diet meant that a large number of people in Greece was dying at birth, early childhood and their twenties. The British magazine, The Spectator claims that not many people managed to live longer than 30. Perhaps 5% made it to 60 and 1% to 80. Therefore, middle-age had been completely eliminated.
In ancient Greece, middle-age didn’t even exist as a concept. According to the ancient Greek philosopher Pythagoras life is divided into four stages: 0–20 childhood; 20–40 adolescence; 40–60 youth; 60–80 old age. Some Athenians calculated age by political responsibility, assuming young up to 30 and old after 60.
However, one of Aesop’s fables hinted at the notion. A man with black hair mixed with grey had two lovers, one old and one young. The old one wanted him to look old as well so she pulled out his black hair, while the young one wanted him to look youthful and pulled out his grey hair. As a result, he was left completely bald.
Another important reason why ancient Greeks didn’t suffer from middle-age spread was that they were eating less and more healthy than contemporary men.