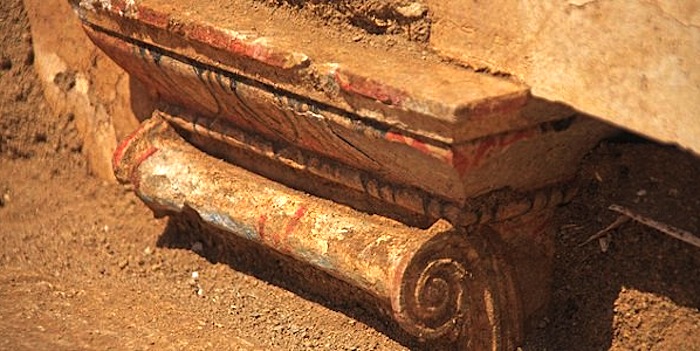 Most of the earth around the two sphinxes found under the apse at the Casta Tumulus in Amphipolis has been removed, the Culture Ministry announced, revealing the upper register of a marble lintel with frescoes under the sphinxes’ base. 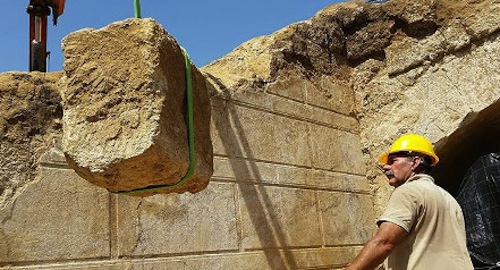 The lintel mimics an Ionic lintel (epistyle) in paint, including red, blue and black colors. It rests on two Ionic capitals, also painted with the same colors, crowning the pilasters that form the door frame.
The archaeological service is continuing the removal of the earth around the apse and the stones of the protecting wall below it, while Friday’s work will include stabilizing Thursday’s discoveries.
The partially uncovered tomb, from the end of Alexander the Great‘s reign, has captivated public imagination, fueling wild speculation that it may contain rich treasures and the bones of an ancient celebrity. 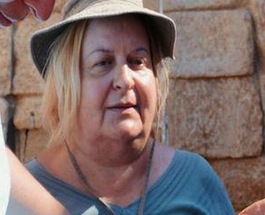 Head excavator: Tomb may not be looted
The head of excavations at Amphipolis, Katerina Peristeri, has revealed her belief that the tomb has not been looted. The statement was made on Friday morning, during a SYRIZA delegation visit to the site.
Peristeri voiced the opinion that the masonry blocks in front of the tomb entrance prevented the looting of the tomb. Citing the immensity of the monument, as well as the presence of the sphinxes and the lion, she believes that it is a globally unique structure. “There is no other such tomb in Greece, or the Balkans,” she said, adding that “We are struggling to do a correct job, and some time is necessary, maybe another month. Today we’re removing stone blocks and digging. We’re not many, but we’re good.”
The SYRIZA delegation did not enter the excavation site but were briefed outside by Peristeri, as excavations are at a crucial point.
So far, archaeologists have uncovered part of the late 4th Century BC tomb’s entrance, with two large stone sphinxes that stand as guards. 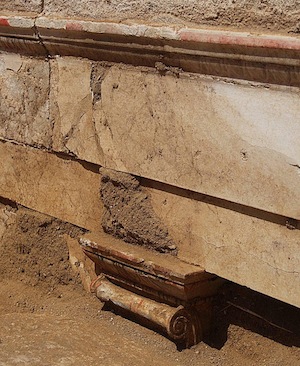 Amphipolis Sphinxes’ wings found, Culture Minister says
On Thursday, Culture Minister Konstantinos Tasoulas, referring to the Amphipolis excavations, stressed the need to promote Greek culture so that the country wins the place it deserves once again.
“In response to these developments and the great interest expressed in Greece and abroad for this unique monument, it is worth considering again the issue of highlighting our culture, the pride that our culture gives us, the issue of protecting our culture along with its development, so that Greece can regain the place it deserves,” Tasoulas said.
The Minister confirmed that parts of the Sphinxes’ wings were found, adding that excavation works continue and may take two weeks or more before drawing definite conclusions, saying that “in archaeology, only facts count, not speculations.”
The total uncovering of the marble Sphinxes found at the Casta hill in Amphipolis, the discovery of a part of a Lion’s back, as well as a small part of the monument’s superstructure in the archaeological excavations were announced by the Culture Ministry on Wednesday.