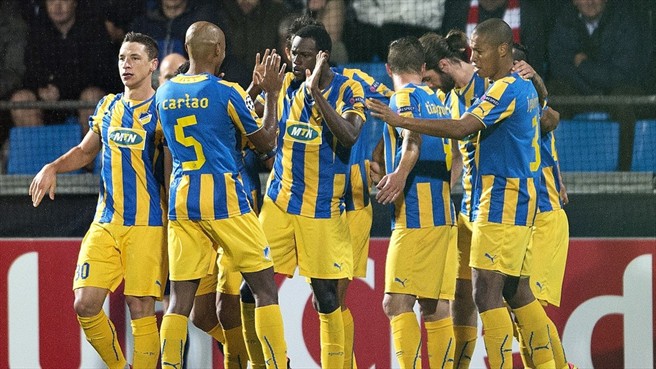 APOEL Nicosia grabbed a precious 1-1 draw against Aalborg in Denmark for the Champions League Playoffs. The 2014 Champions are the only team from Cyprus remaining, fighting for a Champions League Group Stage spot.
In the 2011-12 season, APOEL stunned the football world when they topped their group against Porto FC, Shakhtar Donetsk and Zenit St Petersburg, while kicking out Lyon in the final 16, until they crashed down against the megastars of Real Madrid in the quarter-finals with an aggregate score of 2-8.
APOEL FC will have a chance to repeat that triumph if they beat Aalborg or at least pinch a goalless draw next Tuesday at the GSP stadium in Nicosia.
As for the game itself, both teams had their respective half. The Danish Champions dominated the first half, taking the lead in the 16th minute of the game with a beautiful boot from Thomsen that landed in the right end corner of the net. They went on to miss a number of chances that APOEL’s keeper Urko Pardo punched away, till Brazilian striker Vinicius equalized, after finding himself on a one-on-one situation with Danish keeper Larsen and failing to miss. The 1-1 draw remained, although Vinicius could’ve changed that if he had managed to head the ball in the goal, after a beautifully delivered free kick cross, minutes before the end of the match.
In the other Champions League Playoff games, Celtic got a 1-1 draw against Maribor in Slovenia, while BATE Borisof did the same in Bratislava against local team Slovan. FC Porto and Zenit St Petersburg both purchased 1-0 wins against Lille and Standard Liege respectively.
http://www.dailymotion.com/video/x245i2d_all-goals-aalborg-den-1-1-apoel-cyp-20-08-2014_sport