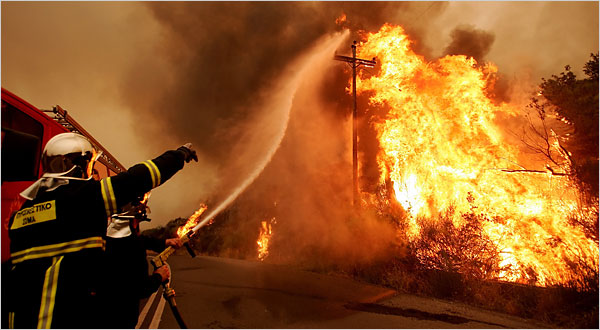 As summer is coming to an end, the first estimates of the Hellenic Fire Department (HFD) is that the number of forest fires in Greece this year fell sharply.
Unlike previous summer periods, the measurable effects of fires in 2014 were milder, as only several thousand acres burned.
According to official data issued by the HFD published in Kathimerini newspaper, the ‘milder’ weather attributed to the decreasing number of fires this year.
Specifically, a senior HFD official attributed the reduction in fires (by almost 25%) to more clement weather conditions, noting that this summer has been significantly milder than the previous. “Humidity levels are higher, wind intensity is lower and we have not had constant and drawn-out heat waves this year,” he said.
In an indication of how mild this year has been, officials drew attention to the fact that it was only last Sunday that the country’s fire service was put on general alert – known as “danger level 4” – while last year, firefighters had been ordered to stand by early in the summer.
Sunday was the busiest day for Greek firefighters so far this year with 79 blazes breaking out across the country, totalling 130 fires over the whole weekend.
Overall, this summer has seen an average of 40 to 45 wildfires per day, according to HFD estimates. The biggest so far broke out in Keratea, southeastern Attica, on July 12, burning about 600 hectares of forestland and damaging a handful of homes, though no injuries were reported. Another large fire broke out in the area of Malesina, in the central prefecture of Fthiotida, on June 26, and burned for three days due to high winds and dry conditions.