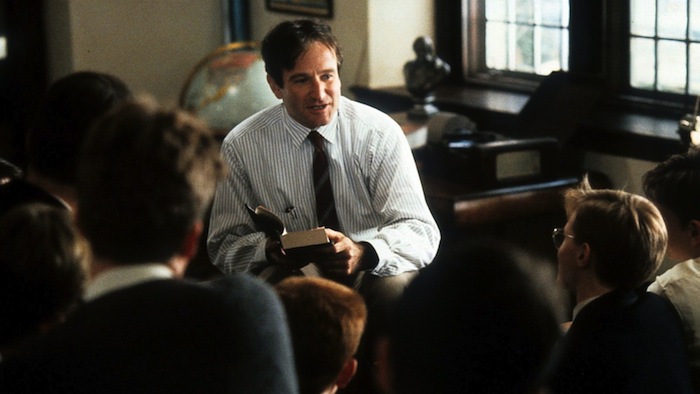 As a fellow comedian, the death of Robin Williams hit hard. But it’s as an actor that he often made me feel the most — in particular, his role in “Dead Poets Society.” That story is all about breaking from conformity, seizing today and living. I will never forget that great speech he gives in the movie, where he quotes Walt Whitman and then asks his students of their lives’ poem, “What will your verse be?”

Comedians, we’re always the outsiders. Born comedians, the ones who are class clowns from birth, usually come from some kind of unfortunate background, and/or have this ability to see all of life’s pain from a very early age, to feel all of life’s pain, to see the inevitable tragedy that we all are going to face. We just feel it all. “Dead Poets Society” and Robin Williams’ role in it was all about that — embracing it, diving into it, being yourself.

As a comedian, Williams influenced me or touched me in the same way he did everybody else, just as a fan who saw just how unbelievably energetic and gifted he was. But with those gifts come burdens. There’s always a yin and a yang with being so talented; there’s always a dark side to the bright gift.

Williams was obviously well beyond working on the road, the loneliness of the road and some of those things that can get really dark. But all of that had to still be in his soul.

I’m sure the days when he wasn’t performing comedy or being funny got tough. Once you’re addicted to those laughs, being the center of attention and spreading joy to cheer yourself up — because you are a sensitive person who feels so much — it gets low. You get low.

It’s quite strange. Every time a comedian dies, as a fellow comedian, even if you didn’t know the person at all, you just feel extremely sad. It’s like losing a fellow soldier. Comedians feel everything; they’re the most sensitive people. It’s a burden to bear and a lot of comedians battle with depression, and at times substance abuse, because they’re such sensitive creatures. Sometimes they lose that battle and give in.

At the same time, these same qualities make comedians the most nonjudgmental people, and we bond on that, on dealing with the pain and just trying to be ourselves. If you see the oddest pairing in the world of people hanging out, they’re probably comedians. If you see a housewife, a skateboarder and a Christian conservative together, there’s a good chance they’re comedians.

This all brings me back to Williams in “Dead Poets Society.” I’m sure all of this is why he gave it that extra something, playing that role of the teacher and urging everyone to follow their own individual path. It’s a message that’s stuck with me and something for which I’ll always be grateful to Robin Williams.

*Yannis Pappas is a Greek-American comedian, best known in the Greek community for his youtube character, Mr. Panos. He is also a co-anchor on Fusion Live. Follow Yannis Pappas on twitter.