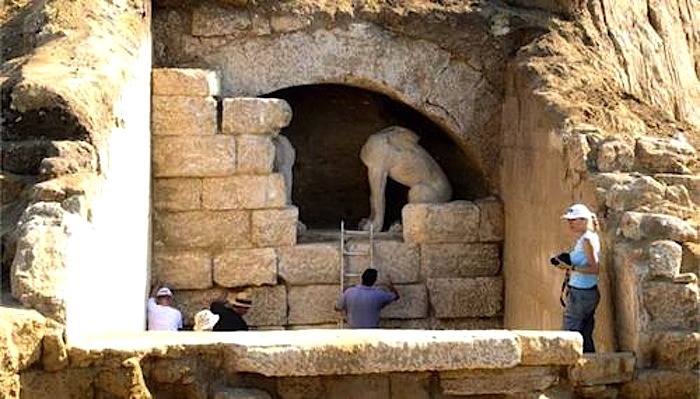 Archaeologists are ready to enter the tomb in Amphipolis, northern Greece, which is considered one of the most important discoveries in the country, dated from around 300 BC – the time of Alexander the Great.
Archaeologists have unearthed a 4.5-meter-wide road and 13 steps that lead to the tomb’s entrance, which is guarded by two carved sphinxes. Excavation work will continue until researchers enter the tomb. The discoveries within the tomb are of great importance as they are crucial for accurate dating.
A stone wall, constructed after the burial to protect the tomb, is going to be destroyed. All the pieces of the wall will be kept by the team of archaeologists.
A geophysical prospecting conducted in the monument has shown that there are three areas inside the tomb. Worst-case scenario would be the collapse of the roof which means that the tomb is filled with dirt. In that case, the area will be carefully cleaned in order to protect grave offerings.
When the archaeologists enter the burial space, they will identify if the tomb is robbed. In that scenario, there is a major risk that important discoveries have been removed.
If the tomb is intact, the researchers will be able to give accurate information on the identity of the dead, based on the bones, sex, skeleton’s height and grave goods.
Although the tomb is dated from the era of Alexander the Great, archaeologists claim that it is highly unlikely that the Greek king was buried at ancient Amphipolis. However, they believe that an important Macedonian official was buried there.