The Hideout of Terrorist Maziotis in Athens 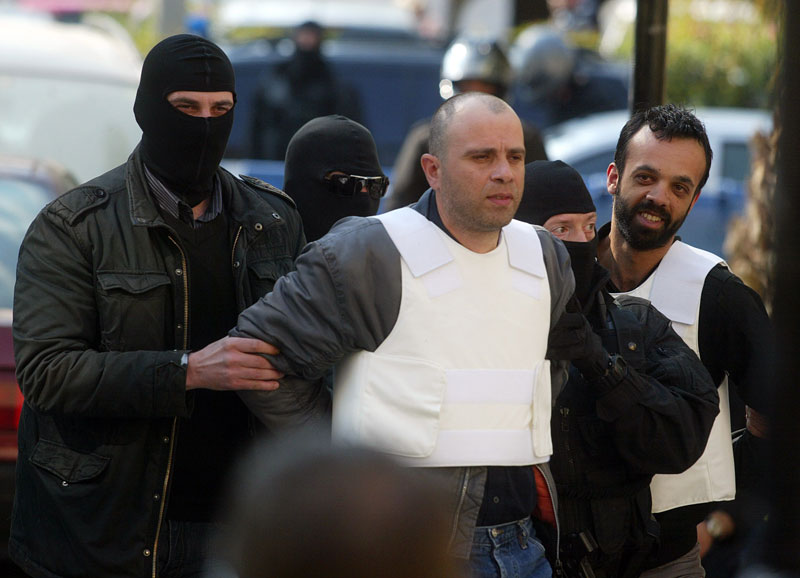 Greek Police raided an apartment in Athens they believe was used by an accomplice of terrorist Nikos Maziotis who was arrested last month.
The property in Patissia area had been rented by Giorgos Petrakakos, lieutenant of Revolutionary Struggle. The 35-year-old has been wanted by police since they arrested Maziotis, head of the terrorist organization, in mid-July in Monastiraki area of downtown Athens.
Police had the apartment under surveillance for several days but decided to force their way in this morning after nobody came in or out of the property. The apartment was believed to be the hideout of Maziotis. The anti-terrorist squad entered the apartment and found DNA believed to belong to the terrorist’s close associates.
The apartment was monitored for over a week and police was hoping that Maziotis’ wife and close associate Paula Roupa would make an appearance. Police is looking for Roupa who is also a fugitive from jail.
Four photos of Roupa were recently given to the public. The photos are just weeks old, as they were taken by a retail shop surveillance camera during the weekend of 12-13 July, as she was paying for some kids toys and clothing at a shop in the area of Marousi. Another photo showing Roupa with her child at a playground was also available to the police but was not given to the public in order to protect the child.
The 45-year old woman had short blond hair and was much thinner than in the past. Roupa had been on the police target long before Maziotis. They were trying to track down her movements for quite some time, in an effort to come closer to the terrorist.
On Monday, July 14, an operation of the anti-terrorist squad took place at the ISAP electric railway but was never completed for unknown reasons. It is believed that Roupa or Maziotis were seen on a train that day.
Police are confident that Petrakakos, who has been missing for four years, is together with Roupa. “The fact that Petrakakos lives as an outlaw over these years makes us believe that he has connections with offenders who will help both him and Roupa remain in the dark,” said an officer of the Greek Police, adding that “Our first goal is to find their hideout containing weapons and explosives, and the garage with the organization’s cars and motorcycles so that we will be able to disarm the members.”
According to information, the anti-terrorist unit is not able to clarify whether the team of Vassilis Paleokostas, with whom Petrakakos has very good relationship, is involved in the coverage and escape of Roupa and seven other members of Revolutionary Struggle.