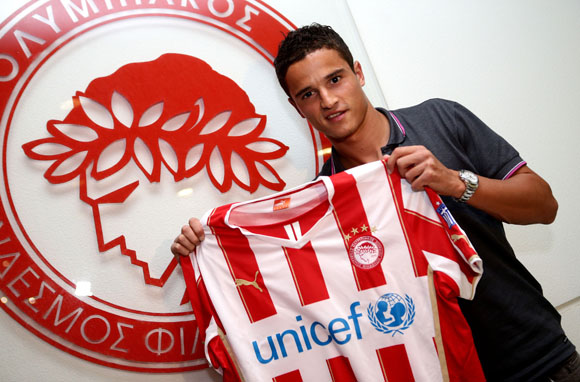 Previously dubbed as one of the most exciting footballers in the world, Ibrahim Affelay has signed with Olympiacos on loan from FC Barcelona.  The agreement ends in January 2015 but the Greek club has the possibility of extending it for another two years.
The 28-year-old Dutchman arrived in Athens today and was later driven to the Olympiacos offices in Piraeus to sign his new contract with the Reds. Hundreds of fans welcomed him at the airport. 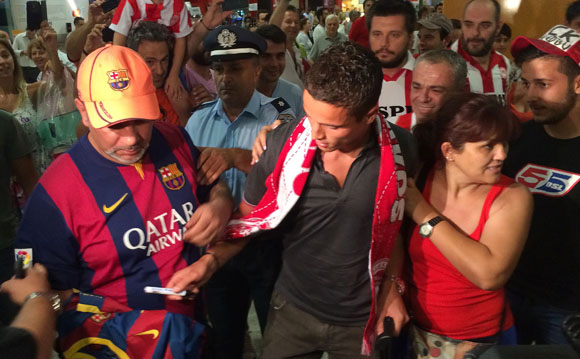 Olympiacos’ new signing includes a great deal of risk, as in the past, the winger of Maroccan descent underwent through two surgeries to heal a torn ACL and a severe hamstring pull. Last year, his playing time was limited to a mere 2 games and a total of 24 minutes. Actually, in the last four seasons he’s only managed to put his kit on less than 50 times.
Ibrahim Afellay’s career has been on the downside ever since his second season in Spain and his first knee injury. However, he managed to follow all of Barcelona’s preseason training this summer without a glimpse of the older faults showing up.
The talented winger (who also plays as a center midfielder) will be filling in Joel Campbell’s shoes who moved back to Arsenal this summer. The latter had a great run in the FIFA World Cup last June, helping Costa Rica reach the quarter finals (by eliminating Greece), a statement which cannot be said about Afellay who missed out of the Netherlands’ quest to the semifinals because of his recent idleness. However, he’s put in more than 40 caps for his country and scored 5 goals.
No matter how risky the decision about acquiring Ibrahim Afellay is, let’s not forget that he was brought to the Camp Nou to be a substitute for Leonel Messi, Pedro and David Villa, the world’s best triplet the last few years. He might have failed to step up to the hype the football world flowered him with, and he might not be able to reach his prior level, but he does have the potential to ensure Olympiacos will remain an elite club in the Champions League next year.