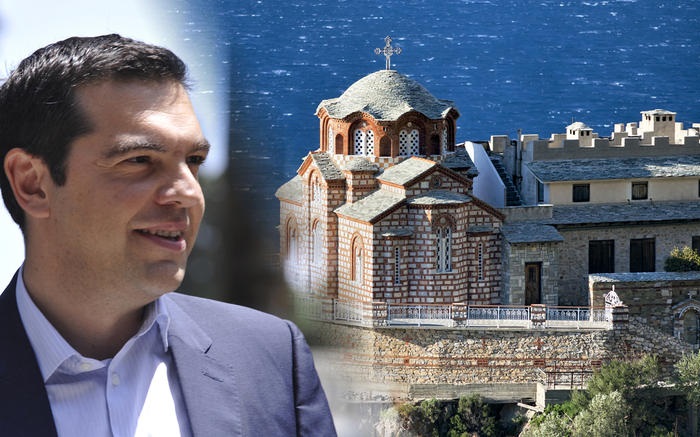 Greek opposition leader Alexis Tsipras visited Mount Athos in northern Greece, on Thursday and Friday, after receiving an invitation from the Mount Athos Holy Community of monks.
He was accompanied by his party’s religious affairs advisors, Yannis Amanatidis and Makis Lykopoulos, and his chief of staff, Nikos Pappas.
Tsipras thanked the monks for their invitation and warm welcome, and noted that Mount Athos is a monument of Greek cultural heritage that should be protected.
During a meeting with the monks, Tsipras used the Zapatista slogan “Everything for Everyone. Nothing for Ourselves” that reflects the concept of helping the others. “Live your lives in this manner,” he advised the monks.
According to amen.gr, the monks at Karakallou monastery commented positively on the fact that the SYRIZA leader refused to go to bed as they offered.
“Instead, he stayed awake waiting for the abbot, who was returning from Crete.”
Tsipras had the chance to discuss with abbot Filotheos who expressed his joy for the visit of SYRIZA leader.
“We are watching your path, we pray for all Greeks and for Greece to have good governors,” said the abbot.
However, many left voters saw Tsipras’ visit to Mount Athos negatively.
It has been almost two decades since the leader of a left party visited Mount Athos. The last visit was by the Communist Party (KKE) historic leader Charilaos Florakis in 1995.