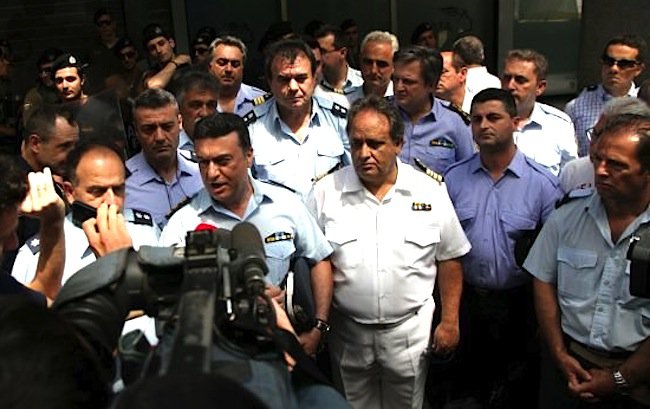 Members of the Greek armed forces protested in Athens on Wednesday morning against the Greek government’s plans to merge their auxiliary pension funds with others.
According to the president of the Panhellenic Federation of Police Officers, Christos Fotopoulos, Greek police officers are considering going on strike.
“If our demands, which are absolutely reasonable, are not met, the members of Greek armed forces will take the next step” he said during the Greek police officers protest in central Athens on August 6.
Furthermore, the members of armed and emergency forces have stopped negotiating with the Greek coalition government and appealed directly to the Compliance Committee of the State Council asking for the full implementation of the decisions regarding the increase of their wages.
At the same time, the report of the Parliamentary Scientific Committee on the integration of subsidiary and equity funds of uniformed men has been declared unconstitutional.
“The Article 221 should be withdrawn because it is profoundly undemocratic and once again includes unconstitutional provisions. This article cancels out any accumulated pension rights and restricts the freedom of choice of the insured,” said the president of SYRIZA, Alexis Tsipras, during his meeting with the Greek armed forces associations.