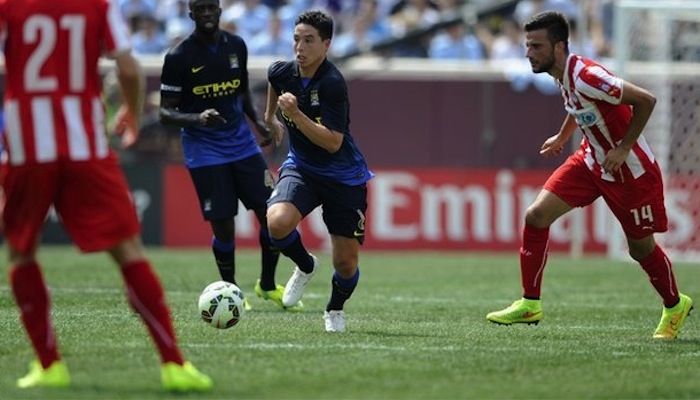 AP – Dimitrios Diamantakos scored twice in regulation and Roberto Jimenez Gago made two saves in a shootout to help Olympiakos beat Manchester City 5-4 on penalty kicks Saturday after a 2-2 tie in the International Challenge Cup game.
The biggest concern for the clubs coming in was the condition of the grass field that had been installed by the tournament promoter over the artificial turf at TCF Bank Stadium, home of the University of Minnesota football team. Although seams in the sod were clearly visible, the players avoided injury on a day when temperatures climbed into the upper-80s, requiring a water break midway through the second half.
“We think the field was terrible, the conditions were terrible, it was very hot today, but our team didn’t care about this,” Greece ‘s Olympiacos coach Michel Gonzalez said through an interpreter. “They wanted to play and that’s what we did. For us it was very important that we participate and play against teams of this level. The fact that we had the opportunity to win, even if it was on penalties, we enjoyed it.”
In the shootout, Avraam Papadopoulos had a chance to give Olympiacos the win in the fifth round but Manchester City keeper Joe Hart made a remarkable kick save on a ball that stayed in the middle of the goal as he dived to the right.
However, two rounds later, Micah Richards of Manchester City missed high, and Anastasios Papazoglou steered a shot into the lower left corner to give Olympiacos the victory.
Aleksander Kolarov put English Premier League champion Manchester City up 2-1 in the 53rd minute on a penalty kick after David Silva was tripped in the Olimpiakos box.
But Diamantakos tied it in the 65th minute when he took a feed at the top of the box, made a move to get past goalkeeper Joe Hart and blasted it into the open net
Manchester City opened the scoring on Stevan Jovetic goal in the 35th minute. Jovetic took a pass from Samir Nasri, dribbled past one defender, then split two others with a right-footed shot that beat a flat-footed Jimenez Gago.
Two minutes later, Diamantakos tied it for Olimpiakos. Ionnis Maniatis got behind the defense in the Manchester City box, then passed back to Diamantakos, who was open near the penalty spot. Diamantakos took one dribble to the left, then fired back across his body and past Hart.
The outcome, however, wasn’t as important to the teams as the chance to face elite competition leading up to the start of league play later this month.
“It’s been extremely useful and the team’s been very professional, like in the first half against Liverpool,” Manchester City coach Manuel Pellegrini said of his club’s showing in the tournament. “The positives will be the quality of these games and the level that was achieved in each of these games. The negatives will be the traveling distances, and that obviously stops the team from training more.”
Gonzalez, whose club made the final 16 of the UEFA Champions League last year before losing to Manchester United, concurred.
“We are preparing ourselves for our national league in Greece but we are also preparing ourselves to participate in the Champions League” he said. “This was a great experience for us in preparation. We played like we want to play in the Champions League.”
After the game Pellegrini confirmed that former Chelsea midfielder Frank Lampard is returning to the English Premier League with Manchester City on a six-month loan from MLS expansion team New York City FC.
“From next week, on Wednesday, he’ll start working with our team,” Pellegrini said. “At the moment, he will start working with our squad because he is a member of the squad. He will be in the fight for a position. We have a very good team. He is one player more. We have a lot of competition, especially in the Champions League, so he is very important to our team.”
Lampard signed a two-year contact with the New York club — owned by Manchester City and the New York Yankees — last month. The MLS team is scheduled to begin play next year.
Copyright 2014 The Associated Press. All rights reserved. This material may not be published, broadcast, rewritten or redistributed.