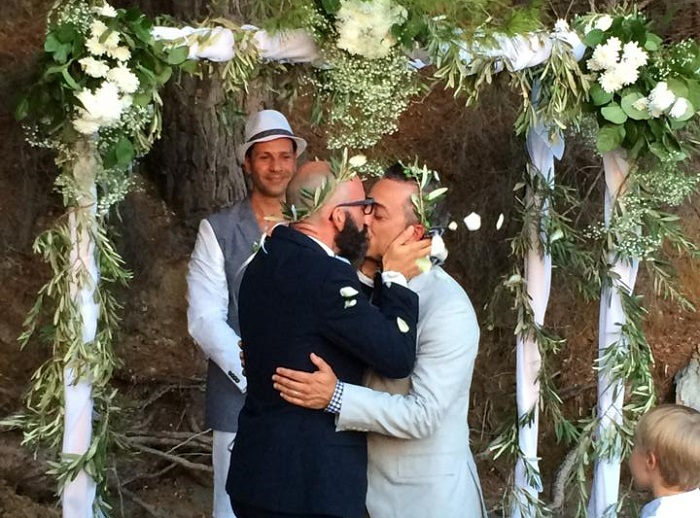 Greek-Cypriot director Harry Mavromichalis married his partner Lance Boyd in a beautiful ceremony that took place on the Greek island of Skopelos.
In the company of their closest friends and relatives, the couple exchanged vows of eternal love and devotion, shortly before sunset. The romantic wedding, on the island where Mamma Mia was filmed, had nothing to envy from the ceremony that we saw on the film. Skopelos and the neighboring island of Skiathos have seen a great increase on visitors who want to marry on these beautiful Greek islands after the film’s release in 2009.

Harry Mavromichalis had previously made headlines when he organized an incredible marriage proposal in New York for his partner.
Mavromichalis released 99 balloons in the sky of New York, and with the help of a flashmob, he proposed to his unsuspecting partner who thought they were going to attend a friend’s birthday party.
According to Huffington Post the choreography consisted of 90 dancers from Marymount College and Pace College. (Watch it below.)

“In the weeks that followed, what I came to realize was that for the first time in the entirety of our relationship I felt I could finally exhale. I know that sounds cliche, but like so many gay men I have always struggled against the feelings of not being worthy of a loving relationship,” noted Mavromichalis.
With his very public declaration of love Harry changed all that. “I finally know what it means to be loved!” said his partner, Lance.
Living in New York for the last 20 years, Mavromichalis started off as dancer and a choreographer, and then into the film industry (currently shooting a feature length documentary on Olympia Dukakis). Harry, a Greek Cypriot, is one of the few who dared to bring change to an island where different is always treated as a threat, never losing faith on his beloved island.
Recently, he was center stage with his support on marriage equality and has been very vocal on gay issues in the US and in Cyprus.