A Nudist Paradise in Rhodes 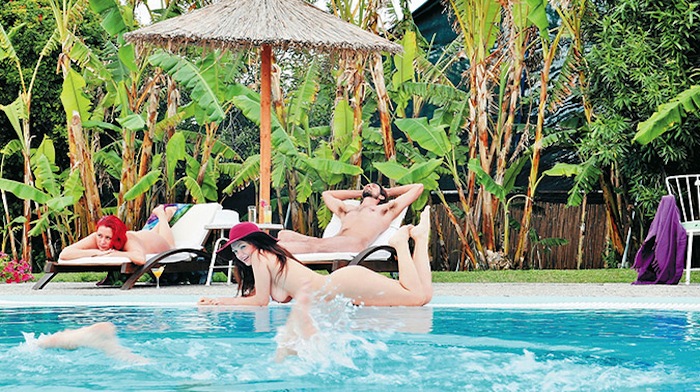 The view of the “big blue,” walks on cobbled streets, rich smells of Greek cuisine, blinding sun and lacy beaches summarize the slogan “Live your myth in Greece.” This is what millions of tourists expect to experience when they book their vacation to Greece.
In recent years, however, a new kind of tourism has timidly started making an appearance, as more and more nudists book their holidays in hotels where nudity is not considered taboo and in most cases it is required.
Naturist Angel is located in Paradisi, 18 km from the town of Rhodes. The nudist hotel opened a year ago, on 15 July 2013, and has since become very well-known among nudist tourists.
Room prices start at 40 euros, while in high demand periods they reach 110 euros. The hotel is a heaven on Earth for nudists who come from all over the world. “Everyone can feel free. Everyone is allowed to be naked in the hotel’s outdoor spaces, in the outside restaurant, the pool bar, around the pool, on the patio. Our customers usually wear a cover up or a towel when they go to their rooms, as they pass by the hotel’s interior spaces. The only time they are fully dressed Is when they arrive,” said Nikiforos Alafouzos, owner of Naturist Angel, and according to him, the only Greek who has ever opened a naturist resort in Greece.
The first tourists came from Turkey and Israel, but this year people from all over the world made reservations to stay at Naturist Angel. In fact, during July, the hotel’s occupancy rate ranged from 85% to 90%, while in August it will reach almost 100%. The hotel consists of 64 beds, while one of its key elements is that it has no single rooms and it exclusively caters to families and couples.