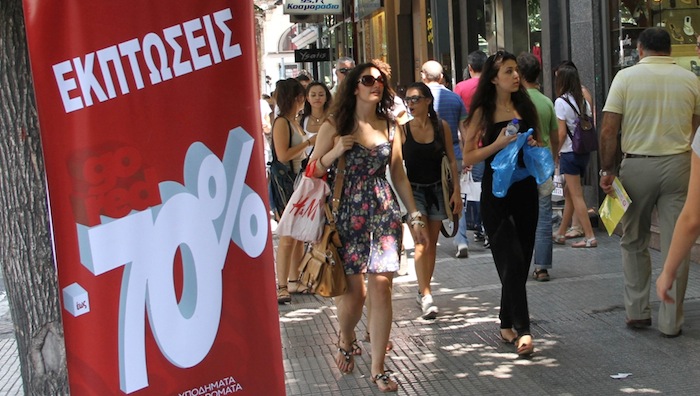 Retail sales were lower during the second week of the summer discount season compared to the first week, according to a Greek commerce confederation (ESEE) survey.
ESEE said that 29 percent of merchants that participated in the survey were not satisfied with their sales, while only 8 percent of them were content with the week’s turnover. ESEE used a sample of 227 stores in Athens, Thessaloniki and other major shopping districts of Attica, Greece.
Overall, turnover during the summer sales season was at the same levels or marginally lower compared to last year. Half of the merchants (51 percent) said sales remained at last year’s levels, 44 percent of them had lower turnover and only 5 percent of participants, mainly apparel and footwear store owners, saw their sales rising.
According to regional commerce associations, ESEE said, retail sales in big cities such as Piraeus, Patras, Heraklion and Larissa fell by 10 to 20 percent, while in tourist destinations like Crete, Rhodes and Corfu, retail market activity was subdued despite expectations for higher sales due to the increased number of visitors.
Commerce sector performance has not yet managed to keep up with tourism activity, ESEE pointed out citing the income tax that citizens are called to pay during the summer sales period as one of the reasons there is a ”freeze” in the market.
ESEE reiterated that summer sales would last until the end of August and expressed optimism that tourism and shopping activity will gear up by the end of the sales season.