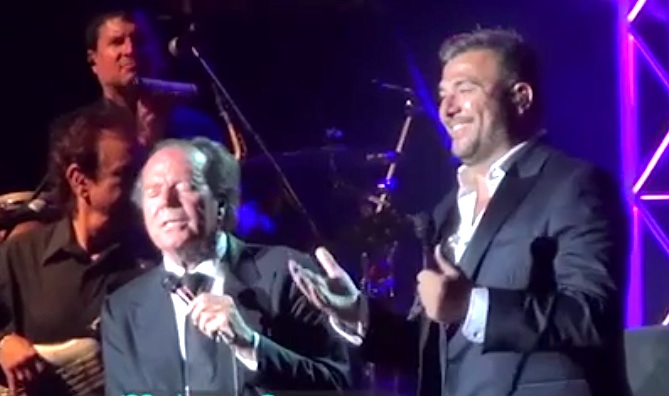 A glamorous evening filled with music took place Wednesday night in Mykonos. Greek singer Antonis Remos sang with world-famous Julio Iglesias in a special event attended by many Greek celebrities in the most cosmopolitan island in Greece.
The beach of Psarou — that was transformed to a concert venue — was filled with people, with big names from the world of Greek show business attending. Among them were singers Pantelis Pantelidis and Irini Papadopoulou, businessman Kostas Piladakis, Marilena Panagiotopoulou, Gogo Farmaki and Annita Nathanail.
The 71-year-old Spanish singer appeared on stage first and he was warmly welcomed by the enthusiastic audience. He then sang a duet with Antonis Remos, who continued the concert and took the crowd with him on a fun musical journey.
Antonis Remos welcomed all the concert attendees in Nammos beach club and told Julio Iglesias that “this is how we have fun in Mykonos.”
Furthermore, when champagne was brought to the stage, Remos jokingly said “Not this again. I’ve been giving interviews about this for two weeks now. Take them away and treat everyone who is back there serving.”
At the end of the night, the sky of Mykonos, Greece was illuminated by scores of fireworks.
[youtube]hFhl_Stfhl0#t=363[/youtube]