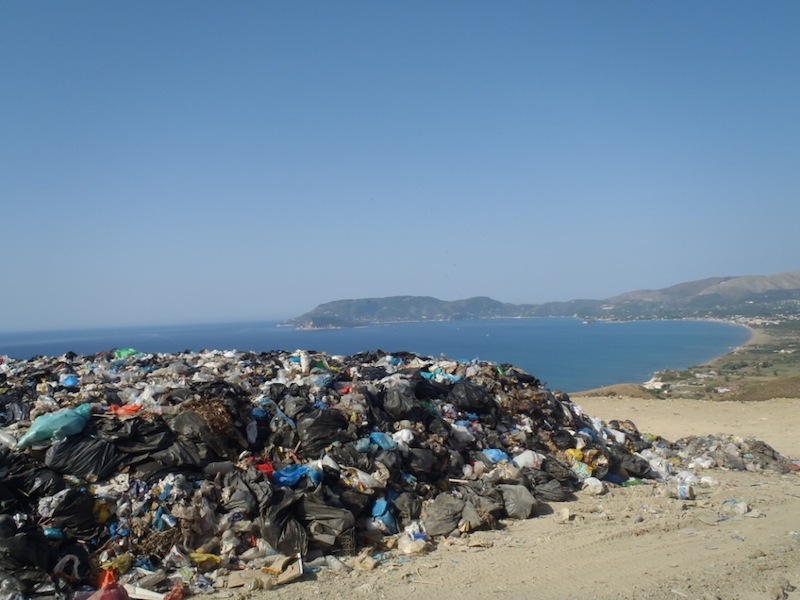 The recent decision of the Court of Justice of the European Union (EU) to condemn Greece for the operation of a landfill within the National Marine Park of Zakynthos, did not come as a surprise, notes the Mediterranean Association to save the sea-turtles (Medasset).
“Rather, it was the sad result of unprecedented negligence for one of the most important ecological sites and tourist destinations in Greece.”
The Court decision notes that Greece neglected to take measures to seal the overfull landfill site which is not functioning properly. On the contrary, responsible authorities allowed the landfill to continue operating without ensuring that it complied with European environmental legislation. For several years the landfill operated without the necessary permits and environmental conditions. In 2011 the authorities committed to restoring the site and preventing a landfill collapse, but instead the landfill operation license was renewed until 2015 in complete disregard of European regulations that apply to “Natura 2000” sites (EU protected areas). Greece failed to ensure that the landfill’s leachate and garbage will stop polluting the precious ecosystem. In March of 2014, the Region of Ionian Islands issued a decision to shut down the landfill. As expected, this last-minute action was not enough to prevent the Court from condemning Greece, as the country had been repeatedly warned to resolve this longstanding problem.
To this day, trucks unload garbage at the landfill. The national, regional and local levels of government have yet to propose any substantial solution for the island’s waste management.
“In essence, the government has showed no true concern for the protection of the most important nesting beach of the Caretta caretta sea turtle in the Mediterranean,” explains Medasset.
“The Greek authorities are jeopardizing both the survival of an endangered species and the sustainable development of Zakynthos. The negative publicity associated with this failure to meet basic international commitments undermines Greece`s environmental policy track record and the country’s reputation as a tourism destination.”
Environmental organisations Archelon, MEDASSET, MOm and WWF Greece sadly note that “our warnings that Greece would be condemned for incompliance were confirmed.”
“We once again express deep concern that no measures have been taken to prevent an environmental disaster in the event of a landfill collapse. Even in the final hour, before the Court decision results in severe fines, the government should fulfill its obligations and duties. The operation of the landfill must officially be terminated and immediate action must be taken for the area’s restoration and the prevention of further environmental damage. In the meantime, an effective solution must be found for the sustainable management of the island’s waste.”