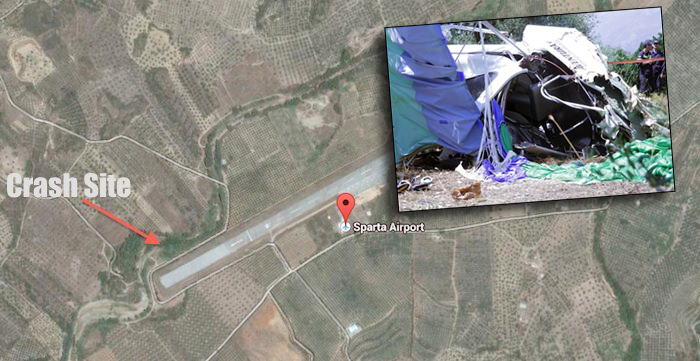 A private plane crashed during take-off, a few meters outside the Sparta airport in Greece, on Saturday, July 26.
The small Cessna aircraft was found pinned to the ground in an olive grove just next to the municipal airport of Sparta. The crash resulted in the death of the 2 crew members, aged 35 and 52 years.
According to information released by the Hellenic Civil Aviation Authority (HCAA), the incident took place during take-off, when the emergency parachute suddenly opened, probably due to wrong handling, stopping the plane from gaining altitude and thus resulting in the crash. The plane had almost reached 100 feet when the pilot made an attempt to turn left, towards Kalamata, before the parachute opened.
According to local authorities, the airport has been closed and all take-offs and landings are prohibited.
The crash site is just 15 meters off the Sparta airport fence, in Pyri, Laconia, and the crash occurred shortly after 10am. The two people were found dead and were removed from the aircraft by the fire department. The exact cause of death will be determined after the forensic examination.