Andreas Bouhalakis Scores One of the Season's Best Goals! 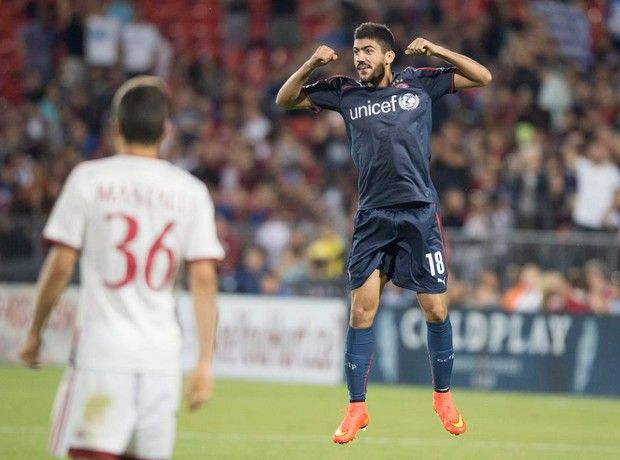 Olympiacos showed a glimpse of what to expect from its team in the next season at a match against AC Milan in Toronto, yesterday.
The 3-0 beating of the historic Italian team by Olympiakos came with unforced plays, short simple passes, pressure off the ball, mentality of a matured team and a bunch of youngsters that grabbed the chance that was given to them. The one that surely stack out is Andreas Bouhalakis.
After an impressive 40 appearances with Ergotelis in the 2012-13 season, the Cretan young talent was bought from Olympiacos last summer only to be sent back to Ergotelis to get some action he would barely find in the Piraeus Port’s team. Coach Mitchel spotted the growth in the 21-year-old player last season by inviting him back and adding him on the squad that traveled to the States for the Champions Cup.
Stepping in the game in the 72nd minute, Bouhalakis needed just 5 mins to fire a dynamite from 35+ yards that landed in the top right corner of AC Milan’s keeper. But it wasn’t just the distance or the accuracy, but the curve he gave to the ball that made commentators all over the world go crazy. The ball took such as spin once taking off the outside of his left foot that it seemed like it was landing on the left top corner when it actually hit the right one!
Here’s a look at it:
https://www.youtube.com/watch?v=zKUj-_GHlfQ
And all the goals:
https://www.youtube.com/watch?v=mwtF_1LHYYc#t=106
It’s already considered one of the best goals of the season